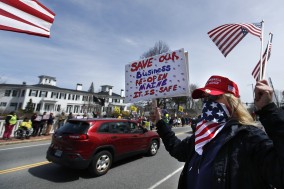 (Liberty Headlines) Boeing and a small number of other manufacturers around the U.S. geared up Monday to resume production amid pressure from President Donald Trump to reopen the economy and resistance from governors who warn there is not enough testing yet to keep the Wuhan virus from rebounding.

Boeing, one of the Pacific Northwest’s biggest employers, said it will put about 27,000 people back to work this week building passenger jets at its Seattle-area plants, with virus-slowing precautions in place, including face masks and staggered shifts.

Doosan Bobcat, a farm equipment maker and North Dakota’s largest manufacturer, announced the return of about 2,200 workers at three factories around the state.

Elsewhere around the world, step-by-step reopenings were underway in Europe, where the crisis has begun to ebb in places like Italy, Spain and Germany. Parts of the continent are perhaps weeks ahead of the U.S. on the curve of the virus, which has killed over 160,000 people worldwide.

The reopenings in the U.S. are a drop in the bucket compared with the more than 22 million Americans thrown out of work by the crisis.

In a dispute that has turned political, the president has been agitating to restart the economy, singling out Democratic-led states and egging on protesters who feel governors are moving too slowly.

While some states — mostly Republican-led ones — have relaxed restrictions, many governors say they lack the testing supplies they need and warn they could get hit by a second wave of infections, especially now that it is clear that people with no symptoms can still spread the disease.

Trump took to Twitter to complain that the “radical left” and “Do Nothing Democrats” are playing politics with their complaints about a lack of tests. And Vice President Mike Pence told governors the federal government is working around-the-clock to help them ramp up testing.

Businesses that start operating again are likely to engender good will with the Trump administration at a time when it is doling out billions in relief to companies.

Protesters have taken to the streets in places such as Michigan, Ohio and Virginia, because the shutdowns are destroying their livelihoods and trampling their rights. Demonstrators have berated their governors and some have demanded the firing of Dr. Anthony Fauci, the government’s top infectious-disease expert.

But Fauci warned: “Unless we get the virus under control, the real recovery economically is not going to happen.”

“If you jump the gun and go into a situation where you have a big spike, you’re going to set yourself back,” he said on ABC’s “Good Morning America.”

In the past few days, Florida gave the OK for beaches to reopen, and Texas on Monday began a week of slow reopenings, starting off with state parks; later in the week, stores will be allowed to offer curbside service. Both states are led by Republicans.

Boeing’s shutdown went into effect March 25 after workers tested positive for the virus and a longtime inspector for the company died. The epidemic has exacerbated problems at the company, already in dire financial trouble over two crashes of its 737 MAX jetliner that killed 346 people.

Washington was the first state to see a spike in COVID-19 cases and enacted strict shutdown orders.

The global game plan now is to open up but maintain enough social distancing to prevent new flareups of the virus.

New York Gov. Andrew Cuomo, in the middle of the most lethal hot spot of contagion in the U.S., reported more encouraging signs Monday among the tragic news, saying hospitalizations in the state have leveled off and the daily count of deaths, at 478, was the lowest in three weeks and down from a peak of nearly 800.

Still, the city canceled three of biggest events in June: the Puerto Rican Day parade, the Israel parade and the gay pride march.