From all of the reporting coming from our disgraced media, you would be led to believe that most in California don’t want to enforce immigration laws… 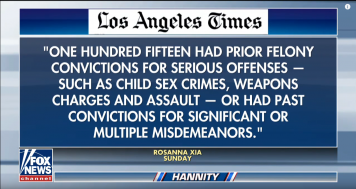 (Breitbart) A poll released by UC Berkeley’s Haas Institute for a Fair and Inclusive Society, a left-wing organization, found some shocking results in the far-left state of California, including a desire from a clear majority of 59 percent to “increase deportations” of illegal immigrants.

California, which advertises itself as a progressive sanctuary state for illegal aliens, has been on the front-lines fighting against President Donald Trump’s push to finally enforce America’s immigration laws.

From all of the reporting coming from our disgraced media, you would be led to believe that not only is all of California opposed to enforcing immigration law, but a majority of the American people.  Hidden in this survey, however, is a truth our media never tells, as well as a number of other interesting finds.

While 59 percent of Californians believe it is very (24 percent) or somewhat (35 percent) important to increase deportations of illegals, in the bluer than blue Bay Area, that number holds at 60 percent.

If you are dumb enough to believe the American media, here are some other findings you will consider counter-intuitive:

Only 54 percent of oh-so lefty, tolerant Californians have a positive view of Muslims.

A full 88 percent say that speaking English is important.

On the issue of assimilation, a huge majority of Californians (73 percent) — including 69 percent of Latinos and 67 percent of blacks — believe that it is “either somewhat or very important to blend into the larger society…”