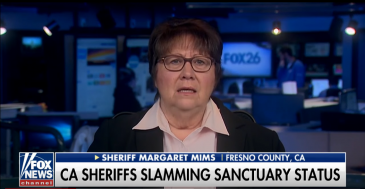 (Franco Ordonez, McClatchy Washington Bureau) WASHINGTON — The Fresno, Calif., sheriff looked across the table toward President Donald Trump and asked him for direction and clarity.

Sheriff Margaret Mims told the president that California’s sanctuary laws have put sheriffs like herself in “an untenable position,” caught between conflicting state and federal laws.

“It’s a disgrace,” Mims said about her department’s inability to work with federal agents..

In February, the Trump administration filed suit against a California law that restricts how and when state law enforcement can interact with federal immigration authorities. The administration has been highly critical of the state laws describing them as “radical” policies that endanger the lives of local law enforcement and the immigrant communities themselves.

Sessions promised that prosecutions of criminal immigrants would likely double. Homan pushed back against criticism that the administration was hurting immigrant families. Homan said sanctuary laws allow criminal immigrants to return back to immigrant communities where they can prey on the vulnerable.

“You’re not protecting immigrant communities,” Homan said to a roomful of like-minded people. “You’re putting them at greater risk,” he said.

Several of the lawmakers present, including Republicans House Majority Leader Kevin McCarthy and Supervisor Kristin Gaspar of San Diego County — who is vying to replace Rep. Darrell Issa in Congress — took digs at California Gov. Jerry Brown and the California legislature for failing to stand up for the Constitution.

“We’ve created a situation where Governor Brown makes San Diego a great place to commit a crime because you can either be across the border in a matter of minutes and shielded by Mexico or you have the option of staying put,” Gaspar said.

Brown responded to Trump’s roundtable remarks in a tweet.

“Trump is lying on immigration, lying about crime and lying about the laws of California,” Brown said. “Flying in a dozen Republican politicians to flatter him and praise his reckless policies changes nothing. We, the citizens of the fifth largest economy in the world, are not impressed.”

“The Trump administration is once again attempting to divide Californians and all Americans with today’s White House meeting,” Feinstein said in a statement. “Their decision to convene this meeting is about fueling fear of immigrants and scapegoating entire communities.”

Christianson was the last law enforcement officer to speak. He echoed the sentiments of many of the other public officials, thanking Trump for his work. He said the state’s sanctuary laws are interfering with his deputies’ ability to work with federal agents to keep his community safe. He said he was privileged to live in the Central Valley where agriculture was a multibillion-dollar industry and promised that ICE was not sweeping through the fields grabbing hard working immigrants.

“You wouldn’t believe how bad these people are,” Trump said. “These aren’t people. These are animals, and we’re taking them out of the country at a rate that’s never happened before.”

And he assured the sheriff the administration would continue working.