PERDUE: ‘He’s just a business guy who spent years successfully negotiating deals all over the world…’ 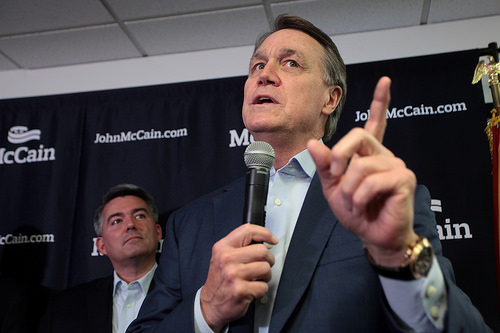 “The only winner President Trump is trying to pick today is America. It’s about making sure people who take showers after work and not before work get treated fairly in dealing with the rest of the world,” he said.

The speech came amid a congressional push to disavow Trump’s decision to reverse sanctions against Chinese telecommunications company ZTE, which earlier this year was banned for seven years in the U.S. due to business deals in North Korea and Iran.

“This agreement may be tied to other elements of this administration’s national security agenda that we don’t know about in full detail, but we need to give them the benefit of the doubt and stop undercutting the negotiating power of our commander-in-chief,” Perdue said.

He decried the fact that many politicians on both sides of the political spectrum have been critical of Trump’s proposed tariffs and trade negotiations.

Over the past few months, Trump has weathered Republican dissent on measures such as his bid to renegotiate or withdraw from NAFTA, with a former campaign adversary, Texas Sen. Ted Cruz, and two other senators encouraging a different approach in a letter penned on March 21.

“Rather than pursuing a defensive strategy that focuses solely on what other countries are doing to us, we need to develop a more comprehensive, offensive U.S. strategy to strengthen our economy from within,” said the letter, cosigned by Cruz, Colorado Sen. Cory Gardner and Montana Sen. Steve Daines.

On Tuesday, another frequent Trump foe from the GOP middle, departing Arizona Sen. Jeff Flake, denounced the president by drawing contrast between his treatment of Canada’s Justin Trudeau at the recent G7 summit and Trump’s flattery of North Korea’s Kim Jong-un at the pair’s bilateral summit in Singapore.

“This attitude of contempt for those nations who share our values and respect for those who do not has been a common thread throughout the administration’s actions over the past 18 months,” Flake said in a speech on the Senate floor.

Trump also faced substantial opposition from the right on his plan to impose steel and aluminum tariffs, with Utah Sen. Mike Lee, Wisconsin Sen. Ron Johnson, Pennsylvania Sen. Pat Toomey and Iowa Sen. Chuck Grassley among those speaking out against the move.

Even advocacy organizations such as FreedomWorks – once a bastion of Tea Party resistance to the globalism of the Obama era – fretted over the possibility of a trade war, saying the Trump administration “would mar its otherwise strong economic record by imposing these tariffs.”

Perdue, in his speech, countered that Trump’s efforts instead sought to correct otherwise lopsided trade agreements that were squandering American dollars.

“They’re nervous about his negotiating style, about things he says—what he’s trying to do with our allies, our adversaries and all around the world. People in this body worry sometimes it’s gonna create a trade war,” Perdue said. “… I can tell you right now, we’re in a trade war.”

Perdue recounted his 40 years of experience in international trade, including stints as CEO of Reebok and Dollar General.

“Like me, President Trump is an outsider to this political process. He’s just a business guy who spent years successfully negotiating deals all over the world,” Perdue said.

He noted that many of the existing trade agreements the U.S. had entered into were purposely imbalanced to help those nations develop.

Perdue said that while bolstering the global economy has reduced poverty in other nations by an estimated 60 percent, America’s own poverty level has remained stagnant since around 1965.

He also invoked the recent summit with North Korea—which received mixed reviews in the press, with some saying Trump’s promise to end joint war games with South Korea and his declaration that the nuclear concerns were over had been premature.

Perdue called on his fellow senators to recognize the past efficacy of Trump’s approach and to respect the complexities of the negotiating process.

“President Trump has, no doubt, an unconventional negotiating style—an outsider’s style, if you will—but, you know what … President Trump’s methodology indeed works.”

Perdue noted that the president’s past tough talk with NATO allies had resulted in the organization stepping up to double the amount of money it spent on security.

While Perdue said he personally would have preferred the Trans-Pacific Partnership agreement of the past, the U.S. was now committed to a bilateral path in negotiations with its Asian partners.

“We need a unified voice, there’s no doubt, but right now this body is sending mixed signals. It’s time to put aside political self-interest and focus on what’s best for the United States of America.”