‘Fraudsters and other bad actors prey on…enthusiasm’ for Bitcoin… 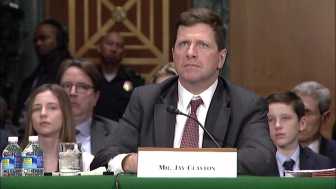 (Joshua Paladino, Liberty Headlines) The U.S. Securities and Exchange Commission and the Commodity Futures Trading Commission are responsible to regulate banks, protect investors, and ensure fair competition in the market.

As the emerging cryptocurrency market has surpassed $300 billion in market capitalization, regulators want to gain a foothold, and Congress wants to know how the SEC and CFTC plan to regulate virtual currency.

The U.S. Senate Committee on Banking, Housing, and Urban Affairs held a hearing on Tuesday with SEC Chairman Jay Clayton and CFTC Chairman Chris Giancarlo to discuss their proposed policies.

Committee Chairman Sen. Mike Crapo, R-Idaho, began the hearing with a brief explanation about cryptocurrency and its swift rise in popularity.

“Virtual currencies are meant to act as a type of money that can be traded on online exchanges for conventional currencies, such as dollars, or used to purchase goods or services, predominantly online,” Crapo said. “Additionally, developers, businesses and individuals are selling virtual coins or tokens through initial coin offerings, also known as ICOs, to raise capital.”

A few cryptocurrencies — Bitcoin, Litecoin, Ethereum, and XEM, among others — have already been incorporated into public use.

Content creators on YouTube, Patreon, and GoFundMe accept Bitcoin, Litecoin, and Ethereum, while XEM has ties with the Chinese app WeChat.

Bitcoin, however, has garnered the most attention as its the market leader.

The rise to $115 billion market cap is up from about $5 billion this time last year.

**MORE COVERAGE OF CRYPTOCURRENCY at LibertyHeadlines.com**

Clayton said technological advancements with virtual currency may benefit the SEC and the economy, but the current hype of the market makes investors susceptible to fraud.

He added that cryptocurrency investors deserve the same protections under the law as mainstream stock, bond, and futures investors, since virtual currency falls “within the scope of the federal securities laws.”

“This ever-present need comes into focus when enthusiasm for obtaining a profitable piece of a new technology ‘before it’s too late’ is strong and broad,” Clayton said. “Fraudsters and other bad actors prey on this enthusiasm.”

Clayton warned traders against investing in coins that did not comply with federal regulations.

He also said that cryptocurrency trading platforms — such as Bittrex, Bitfinex, Coinbase, and Gemini — have to register as national securities exchange with the SEC.

Cryptocurrency markets have “substantially less investor protection,” according to Clayton.

Yet enforcement procedures tackling fraudulent and misleading ICOs have escalated since the SEC Division of Enforcement set up the Cyber Unit, which focuses “on misconduct involving distributed ledger technology and ICOs, the spread of false information through electronic and social media, brokerage account takeovers, hacking to obtain nonpublic information and threats to trading platforms,” Clayton said.

Clayton and the SEC signaled a friendly attitude toward cryptocurrency, though they believe it must be subject to federal securities laws.

“Said simply, we should embrace the pursuit of technological advancement, as well as new and innovative techniques for capital raising, but not at the expense of the principles undermining our well-founded and proven approach to protecting investors and markets,” Clayton said. 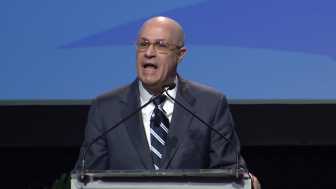 Giancarlo said the federal government should follow the Clinton administration’s “do no harm” policy for the internet in regulating cryptocurrency.

“A Republican Congress and the Clinton administration established a set of enlightened
foundational principles: the Internet was to progress through human social interaction;
voluntary contractual relations and free markets; and governments and regulators were to act
in a thoughtful manner not to harm the Internet’s continuing evolution,” Giancarlo said.

But he doesn’t think it’s something to prevent.

He said he technological advancement to move forward without harming investors.

Clayton and Giancarlo, as representatives of SEC and CFTC policy, showed that the federal regulators plan a role in protecting cryptocurrency traders from fraud and manipulation, while leaving developments in virtual currency to individuals in the marketplace.

“With the proper balance of sound policy, regulatory oversight and private sector innovation, new technologies will allow American markets to evolve in responsible ways and continue to grow our economy and increase prosperity,” Giancarlo said.