‘Many wonderful American people in pain and rage elected you. Many Russians did too…’ 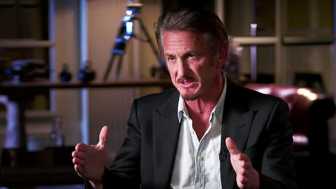 (Daily Mail) Actor Sean Penn’s debut novel’s main character calls for the assassination of the president and dares the commander in chief to ‘Tweet me, b****’, DailyMail.com can reveal.

The two-time Oscar winner’s 176-page fiction, titled Bob Honey Who Just Do Stuff, is about a ‘modern American man, entrepreneur, and part-time assassin’.

The main character, septic tank cleaner Bob Honey, tells tales of working with military contractors in Iraq, being employed by the government to kill the nation’s resource-draining elderly, and meeting an El Chapo-esque drug lord who had just escaped prison.

Penn first released the gonzo journalism-style novel as an audiobook in 2016 under the pseudonym ‘Pappy Pariah’.

During appearance at the Los Angeles County Museum of Art at the time, Penn said he had close bond with Pariah, but also called him a sociopath.

Penn didn’t publicly acknowledge that he wrote the book until months later when he said he wanted to expand on the story and publish it in paper form.

He said in a news release: ‘It was soon after I finished narrating the short audio of ‘Bob Honey’ that I began to feel I had only scratched the surface of this story I wanted to tell.

‘Expanding that original idea into a fully-realized novel has been an exciting challenge.’

The book’s main character, Bob Honey, is painted as a 55-year-old Southern Californian who gets angry at the news, despite not fully understanding it….

Toward the end of the novel, Honey admits himself into a hospital and writes a letter to the president of the United States, who is eerily similar to Donald Trump but goes by the name, Mr Landlord.

He writes: ‘Many wonderful American people in pain and rage elected you. Many Russians did too. Your position is an asterisk accepted as literally as your alternative facts…Original Source…