MCCONNELL: ‘Our members feel we have an obligation to listen to the arguments…’ 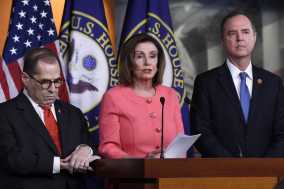 Intelligence Committee Chairman Adam Schiff, who led the probe, and Judiciary Chair Rep. Jerrold Nadler, whose committee approved the impeachment articles, as among the managers of the prosecution.

“Today is an important day,” said Pelosi, flanked by the team. “This is about the Constitution of the United States.”’

Schiff and Nadler will lead the seven member team that includes several lawmakers, particularly those with courtroom experience.

They include Hakeem Jeffries of New York, Sylvia Garcia of Texas, Val Demings of Florida, Jason Crow of Colorado and Zoe Lofgren of California.

During Pelosi’s press conference, Trump tweeted that impeachment is “another Con Job by the Do Nothing Democrats. All of this work was supposed to be done by the House, not the Senate!”

The House is set to vote later in the day to send the articles of impeachment to the Senate for a trial on whether the charges of abuse of power and obstruction of Congress are grounds for his removal. The managers will walk then walk the articles across the Capitol to the Senate.

The Senate is expected to transform into an impeachment court as early as Thursday, although significant proceedings wouldn’t begin until next Tuesday after the Martin Luther King Jr. holiday. The Constitution calls for the chief justice to preside over senators, who serve as jurors, to swear an oath to deliver “impartial justice.”

McConnell, who is negotiating rules for the trial proceedings, said all 53 GOP senators are on board with his plan to start the session and consider the issue of witnesses later.

Senate Republicans also signaled they would reject the idea of simply voting to dismiss the articles of impeachment against Trump, as Trump himself has suggested. McConnell agreed he does not have the votes to do that.

“There is little or no sentiment in the Republican conference for a motion to dismiss,” McConnell said Tuesday. ‘’Our members feel we have an obligation to listen to the arguments.”

A mounting number of senators say they want to ensure the ground rules include the possibility of calling new witnesses.

At Tuesday’s private GOP lunch, Sen. Rand Paul of Kentucky warned that if witnesses are allowed, defense witnesses could also be called. He and other Republicans want to subpoena Biden and his son, Hunter, who served on the board of a gas company in Ukraine, Burisma, while his father was vice president.

McConnell is drafting an organizing resolution that will outline the steps ahead. Approving it will be among their first votes of the trial, likely next Tuesday.