(Ben Sellers, Liberty Headlines) As analysts work to make sense of the mixed outcome from Tuesday’s midterm election, some may wonder whether Speaker of the House Paul Ryan’s ineffectiveness in mobilizing the House GOP was responsible for losing the lower chamber to Democrats.

In reality, a complex tapestry of intangible factors—and a few historical constants—played a part.

But the Wisconsin congressman, whose divergence from Trumpism made him a political casualty, certainly had a role in it.

Despite public statements Trump made at rallies that the midterms were a referendum on him, media outlets including the Los Angeles Times and Politico reported that the president privately held the Congress responsible for what he considered to be their elections, and pinned much responsibility on the retiring Ryan for his failure to lead.

Trump publicly said as much last week after Ryan second-guessed the legality of the president’s proposal to repeal birthright citizenship by executive order:

Paul Ryan should be focusing on holding the Majority rather than giving his opinions on Birthright Citizenship, something he knows nothing about! Our new Republican Majority will work on this, Closing the Immigration Loopholes and Securing our Border!

While the two Republican leaders have largely avoided the public disputes that others—even members of Trump’s own cabinet—have engaged in, the exchange offered a window into the out-of-sync dynamic that disappointingly resulted in Congressional gridlock during what should have been the GOP’s shining moment.

Not only did the House struggle to find traction on countless legislative issues, such as balancing the budget and pushing through entitlement reform—two of Ryan’s and Trump’s shared objectives—but the election effort itself seemed fraught with disarray and lackluster candidates going up against a well-funded and well-coordinated Democratic machine.

The morning after the midterm election, Trump posted that candidates who followed his lead for the most part fared well.

Those that worked with me in this incredible Midterm Election, embracing certain policies and principles, did very well. Those that did not, say goodbye! Yesterday was such a very Big Win, and all under the pressure of a Nasty and Hostile Media!

Whether one can cast blame the departing Ryan, one of more than 40 GOP congressmen who decided not to pursue re-election when faced with the daunting road ahead, may be something of a “chicken vs. egg” question that depends on the perspective.

In the six years after being selected as Mitt Romney’s 2012 vice presidential running mate, Ryan, now 48, was branded everything from P90X beefcake to political wunderkind to Ayn-Rand-reading face of neoconservatism to policy wonk determined to fix the tax system to a last-gasp GOP savior following a party mutiny over his predecessor, former Speaker John Boehner. 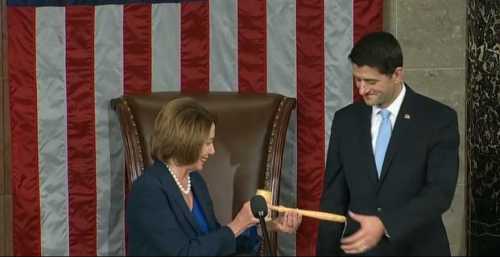 Ryan spent 10 terms in Congress, chairing two powerful committees before getting drafted into the speakership. But unbeknownst to him, by time he assumed the gavel in October 2015, the fate of his own political trajectory and legislative ambitions had already been sealed by Trump’s June 2015 ride down a golden escalator to announce his candidacy.

Ryan’s reluctance to step into the role of Congress’s main cat-herder was punctuated by his difference in vision and style from Trump. The former’s career inside the D.C. Beltway had acclimated him to a different kind of deal-brokering—one geared toward sausage-factory compromises, albeit a little too eager to acquiesce to the opposition—than the pragmatic business mogul who embraced conflict and controversy with an eye toward winning big-time.

Like Boehner, Ryan struggled as speaker to bridge the gap among factions and to placate the various stakeholders. As seasoned liberal adversaries like Nancy Pelosi maneuvered to regain power by undermining any legislative action, on Ryan’s right the increasingly vocal House Freedom Caucus quickly lost confidence in him over his lukewarm support of Trump.

Meanwhile, in the world outside D.C., Ryan was less than assured of safeguarding his own working-class district from an embarrassing political defeat at the hands of either a primary challenger or a well-funded progressive like Randy “The Iron Stache” Bryce, who promised to ‘repeal and replace‘ the incumbent.

Publicly, Ryan (who at 16 lost his father to a heart attack) expressed his desire to spend time with his family as his three children approached their teenage years. The shooting of House Majority Whip Steve Scalise last year by a deranged, left-wing radical not only waylaid the legislative agenda for several crucial months, but also, no doubt, added to the psychological toll pressing on Ryan—third in ascension order for the presidency—to step away.

In announcing his retirement in April, Ryan said, “[I]t’s easy to [let politics] take over everything in your life, and you can’t just let that happen because there are other things in life that can be fleeting as well—namely your time as a husband and a dad, which is the other great honor of my life.”

But as Ryan’s mind drifted back to the Badger State, the result was a power vacuum among House GOP leadership that left Trump pulling double duty.

Where other chief executives in his position historically have maintained a low midterm profile in order to avoid making it about their policies and personalities, Trump took ownership, barnstorming across the country in recent weeks.

From a historical perspective, it was a success—his projected loss of 36 seats (with some races on Wednesday still being counted or contested) fell in line with expectations—unlike Bill Clinton and Barack Obama, who each ceded control of Congress in their first midterms with losses of 52 and 63 seats, respectively.

Tremendous success tonight. Thank you to all!

In his statement following the loss, Ryan brought out his customarily analytical approach by noting that on average, going back to 1862, the president’s party has lost 32 House seats and two Senate seats in midterm elections (Trump’s Senate is expected to gain three).

“Tonight history has repeated itself,” Ryan said. “A party in power always faces tough odds in its first midterm election.”

But he also acknowledged the new political realities with an appeal to his successors “find common ground” despite the rancor.

“We don’t need an election to know that we are a divided nation, and now we have a divided Washington,” Ryan said. “As a country and a government we must find a way to come together.”