‘In no way am I trying to erase history. But we shouldn’t glorify our shameful past…’ 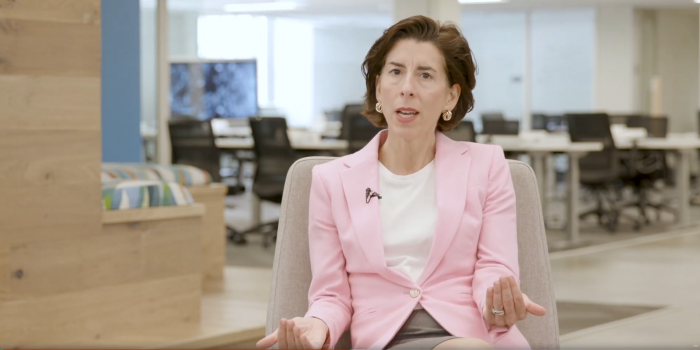 (Michael Barnes, Liberty Headlines) At a time when nearly anything can be construed as racist or promoting slavery, the governor of Rhode Island is upping the ante.

Gov. Gina Raimondo, the Democratic chief executive of the nation’s smallest state, signed an executive order on Monday to take the “first steps” toward changing the state’s name.

Rhode Island was founded as an original British colony in 1636. Its official name was, “The Colony of Rhode Island and Providence Plantations.”

Three years after the signing of the U.S. Constitution it became known as “The State of Rhode Island and Providence Plantations.”

Now, 230 years later, the name is offensive because of the word plantation‘s perceived association with slavery.

“Whatever the meaning of the term ‘plantations’ in the context of Rhode Island’s history, it carries a horrific connotation when considering the tragic and racist history of our nation,” state Sen. Harold Metts told the Providence Journal.

Metts, a Democrat, is the only black member of the Rhode Island Senate. The state’s government has a Democrat “trifecta,” consisting of single-party control of both houses of the state legislature and the governor’s office.

Metts introduced a bill to change the state’s name last week, but Raimondo is taking the first meaningful action.

Her order declares the state’s official name as “Rhode Island.” No longer will any prior reference be allowed on gubernatorial executive orders, citations or letterheads.

The order further directs all state agencies to strip any mention of the state’s full name on government websites.

Permanently changing the name, however, will require changing the state’s constitution. And that requires a statewide ballot referendum.

A previous attempt to strip the “plantations” term occurred in 2010, but an astounding 78 percent of voters rejected the proposal based on the popular recognition of the state’s long anti-slavery history.

Rhode Island was a historically agrarian economy. It also sided with the Union in the American Civil war and was the first colony to pass an abolition law in 1652—or 138 years before even becoming a state.

The recent push for the name change started when an online petition began circulating after the death of George Floyd, a criminal suspect who died while in the custody of Minneapolis police.

“In no way am I trying to erase history. But we shouldn’t glorify our shameful past,” Tyson Pianka, a half-black student at the University of Rhode Island told the Associated Press earlier this month.

Pianka, 20, organized the online petition. “Now is a perfect time to do it,” he said.