‘The household is in relatively good shape…’ 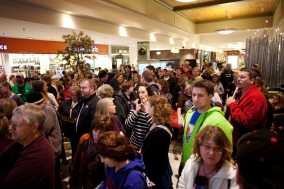 (Liberty Headlines) Despite persistent media predictions of pending doom (without evidence) about the US economy, the National Retail Federation on Thursday said it expects Americans to continue to spend and load up on gifts in a strong holiday shopping season.

Holiday retail sales in November and December are projected to rise between 3.8 and 4.2 percent to as much as $730.7 billion, the NRF said in their annual forecast.

Low US unemployment, rising wages and gasoline prices that are below the year-ago levels are behind the trade group’s positive outlook.

Strong household spending has been a linchpin of the US economy throughout 2019 even as business investment has slowed amid myriad trade conflicts initiated by President Donald Trump.

But US stocks have fallen sharply this week on the heels of economic reports showing weakening in the manufacturing and services sectors and lower hiring than expected in September.

“The stock market is not the economy,” Kleinhenz said in a briefing with reporters. “As long as we see the job outlook look positive and wages continue to move along, I think consumers overall will see through this.”

NRF officials praised the Trump administration decision to delay tariffs on some key Chinese goods such as toys and many electronics until mid-December to try to avoid harming consumers during the critical holiday shopping period.

However, NRF president Matthew Shay said tariffs should be seen as taxes on consumer, and another round of punitive duties on European goods announced by the White House on Wednesday was unwelcome.

Washington plans to impose 25 percent tariffs starting October 18 on a host of products from the European Union in a trade dispute over subsidies for Airbus, including cheeses, Spanish olives and olive oil, whisky, and wool sweaters.

Retailers in many cases have taken steps to blunt the effect of tariffs on prices, whether through pressuring suppliers, moving production to countries not affected by tariffs, or accepting a hit to profits, so the impact has not been fully felt by consumers.

But Shay said “there is a real cost to what we’ve done in the imposition of tariffs.”

“There’s been a calculus made that in the face of a strong and growing economy, you can sacrifice a little bit by imposing tariffs because the economy can sustain it,” he said.