SEN LEE: ‘To change that number now, for the barest of partisan reasons, would fundamentally delegitimize the Court…’ 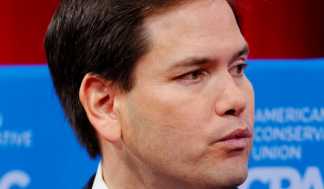 (Joshua Paladino, Liberty Headlines) More than 80 years after President Franklin Roosevelt’s plan to pack the Supreme Court failed, Democrats again are considering the option as a way to secure their far-left agenda.

But Sen. Marco Rubio, R-Fla., and 11 of his Senate Republican colleagues want to permanently thwart politicians—on the left or the right—from grabbing power by adding seats on the high court.

He introduced a constitutional amendment on Tuesday that would cap the number of Supreme Court Justices at nine — the number the court has had since 1869.

The amendment would prevent Congress from altering the balance of the Supreme Court in favor of one political party, as FDR attempted with the 1937 Judicial Procedures Reform Bill, which would have let him appoint an additional six justices.

‘The Democrats’ court packing proposal represents the latest short-sighted effort to undermine America’s confidence in our institutions and our democracy. America’s institutions are far from perfect. But over the past two centuries, they have provided a framework for our nation to become the most dynamic, most vibrant, and most exceptional nation in all of human history,” Rubio said.

It is rare that more than 50 percent of Americans disapprove of the Supreme Court, likely because the public views it as impartial and non-partisan, though this outlook could slip as Democrats make each subsequent SCOTUS appointment more outrageous than the last.

“To prevent the delegitimizing of the Supreme Court, I am introducing a constitutional amendment to keep the number of seats at nine,” Rubio said. “Our institutions matter. Our Constitution matters. And we should fight to protect them.”

Sen. Mike Lee of Utah is among the Republican Senate co-sponsors of the amendment.

“The Supreme Court has functioned admirably for almost 150 years with nine justices,” Lee said. “To change that number now, for the barest of partisan reasons, would fundamentally delegitimize the Court and throw our entire constitutional framework into question. This amendment is a good common-sense step to make sure neither side takes this drastic and dangerous step.”