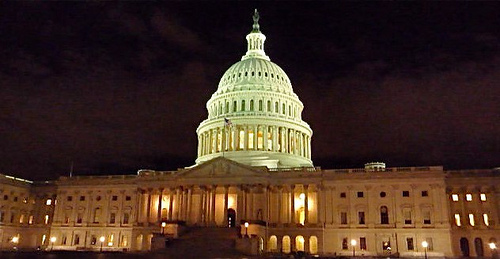 Under Rep. Duncan’s bill, H.R. 367, anyone who can legally buy a gun can buy a suppressor.

This legislation has tremendous grassroots support.

But it also has the support of someone who has the ear of President-elect Donald Trump: the incoming president’s eldest son, Donald Jr.

“It’s a safety issue,” Trump, Jr., said in a September interview, referring to impact a noise reduction device can have on the user’s and spectator’s hearing.

Contrary to pop culture myth, a suppressor does not “silence” a weapon.  It does, however, decrease the sound level by around 30-35 decibels.

In most cases, the noise level would be approximately what the shooter experiences wearing common hearing protection without a suppressor.

In other words, while a suppressed shot might not be heard ‘round the world,’ it is far from silent.

Gun control groups are, predictably, outraged over even this modest safety bill.

“Silencers are military-bred accessories that make it easier for criminals to take innocent lives,” said Kristen Rand, Legislative Director of the Violence Policy Center in a statement last year.

The facts don’t line up with Ms. Rand’s position.  Though suppressors have been legal to own for more than one hundred years, they are rarely used in the commission of a crime.

In one California study that covered a ten-year period, suppressors were used in only one-tenth of one percent of all homicides.

Suppressors are not preferred by criminals…