President perceived as friend to the gun industry, which doesn’t do it any favors at the cash register… 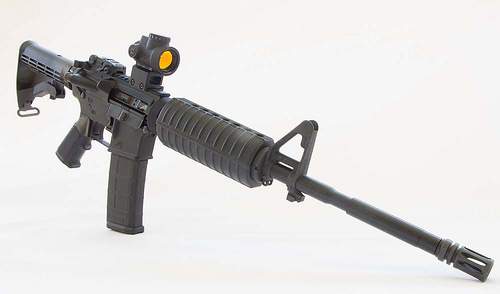 An agreement will reduce the company’s debt by $700 million and add $145 million in new capital in hopes to boost profits.

Some say the election of President Donald Trump is to blame for Remington’s woes.

He was the first president to speak to the National Rifle Association in 30 years.

He reassured gun owners of his commitment to protecting the Second Amendment, telling the NRA, “You have a true friend and champion in the White House,” the Associated Press reported.

Feinberg bought Remington in 2007, before the election of President Barack Obama, when gun sales boomed due to fears of an impending crackdown on firearms ownership.

From 2007 to 2017, background checks — an indicator of gun sales — increased dramatically.

**MORE COVERAGE OF GUNS at LibertyHeadlines.com**

With the seemingly inevitable election of another anti-gun Democrat in Hillary Clinton, people continued to buy firearms.

But that all changed with Trump’s election.

Background checks fell more quickly in 2017 than any year since 1998, according to the FBI.

Remington also struggled against lawsuits and poor public perception after the crazed shooter at Sandy Hook Elementary in Connecticut used one of its AR-15 Bushmaster rifles.

While the company was cleared of all wrongdoing, some Cerberus investors fled nonetheless.