(AFP) More massive than the US economy, the national debt hit a new record of $22 trillion under President Donald Trump but Republicans who traditionally rail against debt and deficits have remained mum.

The sum of borrowing to cover chronic deficits as well as growing interest payments, this mountain of debt already stood at $19.95 trillion when Trump entered the White House, reaching the equivalent of US GDP for the first time since World War II.

By comparison, France’s debt, which also is about the same as its GDP, amounted to a little more than 2.3 trillion euros (about $2.6 trillion) in late September.

The massive corporate tax cuts that Trump pushed for at the end of 2017, and the surge in spending, especially in defense, have increased the fiscal deficit for the world’s largest economy.

“If we don’t have a strong military, you don’t have to worry about debt, you have bigger problems,” Trump told reporters last week.

Administration officials continue to argue that the tax cuts, which are expected to widen the deficit by $1.5 trillion over 10 years, will pay for themselves by boosting economic growth and thereby increasing tax revenues.

But despite faster growth, the budget deficit climbed 17 percent to $779 billion last year, the worst since 2012. And according to the non-partisan Congressional Budget Office (CBO), the deficit is expected to widen further this year to $900 billion.

The United States saw a budget surplus for four years under Democratic president Bill Clinton and the Republican-led Congress, amid a booming economy, but the war in Iraq under Republican George W. Bush once again plunged federal finances into the red.

Democratic president Barack Obama had to deal with the aftermath of the 2008 global financial crisis that led to a ramp up in government spending due to political leaders’ decision to bail out large banks, causing the federal books to deteriorate badly.

That helped fuel the birth of the Tea Party, a populist political movement that contributed to Trump’s rise to power.

But when it started to surge again under Trump, the Republican deficit-hawks were strangely silent. 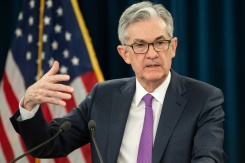 AFP/Federal Reserve Chairman Jerome Powell said the government should address its unsustainable finances, largely the result of an aging population

Beyond the politics, however, the aging US population with the accompanying increase in health and pension expenditures is the structural issue that is the primary cause of chronic US deficit.

Federal Reserve Chairman Jerome Powell frequently points out that while it is not his role to set fiscal policy, “it’s not a secret, it’s a long-known fact that the US federal government budget is on an unsustainable path and that needs to be addressed.”

Of course the Fed’s interest rate increases — nine in the past four years — have caused an increase in the debt service costs, and Trump has frequently lashed out at the central bank, calling it “crazy” and a greater economic threat than China.

Interest on the public debt cost the US government $13 billion more in December compared to a year earlier.

In addition to the US sovereign debt, which thanks to the strong dollar continues to be viewed worldwide as a safe investment, corporate and consumer borrowing are increasingly a source of concern.

US corporate borrowing has almost doubled in just over a decade, fueled by the Fed’s cheap money policy after the 2008 crisis, and now stands at $9 trillion. The Fed calls this “a macroeconomic risk.”

And household debt now stands at $13.5 trillion, well above the previous peak before the crisis.

While three quarters of the total is home mortgages, student loans, which put the brakes on consumption of young people, last year hit a record of nearly $1.5 trillion.

And auto loans, which also set a record of just under $1.3 trillion, are seeing rising delinquency rates that have sounded some alarm bells at the Fed.