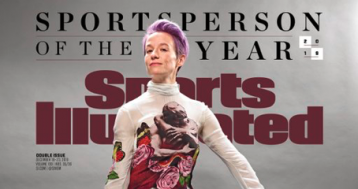 “While we don’t get to choose what it is we witness, we are the gatekeepers of those stories, and we do get to decide how we bear witness to the world around us and to the truth that we see,” Rapinoe said during her acceptance speech. “It is true that I am the fourth woman deserving of this award? I don’t think so.”

The publication also employs few minority writers, she pointed out.

Shortly after she was named ‘Sportsperson of the Year,’ Rapinoe vowed to use her platform to advocate for social justice issues and Democratic platforms.

And that means pointing out difficult truths, she told Reuters.

“Sports Illustrated needs to look at itself and think, ‘what kind of story are we telling our subscribers and are we telling the country about sports in America? As a sports news organization, what news are you reporting? There seems to be a heavy bias on the guys,” she said.

Rapinoe also promised to play a much more active role in politics in 2020.

“I think the most important thing is to get that maniac out of the White House,” she said. “Get me on the bus, get me on one of those planes. I want to rile people up! Something about me is motivating people to do something, or people are interested. If I’ve got to knock on doors to get people to vote, I’m down.”