‘The call of the people is ‘Resign Rahm’… 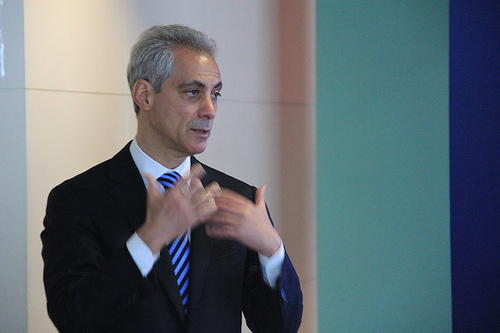 (Kaylee McGhee, Liberty Headlines) Organizers planning an anti-violence march in Chicago said they want Mayor Rahm Emanuel to resign because of his inability to get the city’s violence under control.

Rev. Gregory Livingston, one of the march’s leaders, said the mayor’s support is not necessary or expected.

“The call of the people is ‘Resign Rahm,’” Livingston said told the Chicago Tribune. “So how, then, can you back your own regime change? How do you sanction your own termination? How dumb, naive and self-hating do you think we are?”

Emanuel recently said he was considering backing the anti-violence march, and that his decision would be based on the organizer’s public safety planning with police officials.

But Livingston said they have no intention of meeting with police Superintendent Eddie Johnson.

“The protest route has been well publicized. We have no need to talk with Superintendent Johnson,” Livingston added. “Did Dr. King talk strategy with Bull Connor? With Gov. George Wallace?”

Livingston said he’s been contacted by both Emanuel and Johnson, but that the talks didn’t go anywhere and he didn’t expect them to continue.

“Honestly, when the mayor endorses a protest, it’s no longer a protest,” Rev. Ira Acree, another organizer, said. “It becomes a parade, and we’re on serious business.”

Calls for Emanuel’s resignation are increasing as gun violence in the city continues to skyrocket.

More than 1,607 people have been shot just this year, and more than 200 homicides have been reported since January, according to the Tribune.

The city’s homicide total remains the highest of any U.S. city, with more killings than New York City and Los Angeles combined.

In February, Emanuel pushed gun control legislation, saying America is in the midst of a “gun violence crisis.”

“We have a crisis,” Emanuel said after the Parkland, Florida school shooting on Valentine’s Day. “We had Columbine, we had Connecticut, we had Virginia Tech, but there is no doubt that Florida got to a point where the students saw what happened to their classmates and said, ‘Enough is enough,’ and the political system now knows they can’t wait this out until another news item comes along. They have to act.”