‘The personal attacks on these people..were unprovoked and no volunteer should ever have to endure something of that nature…’ 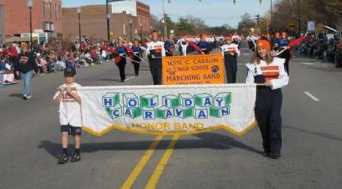 (Kaylee McGhee, Liberty Headlines) An annual parade in Rowan County, NC has been permanently shut down after being accused of discrimination last year by an LGBT group.

Parade officials said in an email on Tuesday that the annual Holiday Caravan parade is “no more.”

At last year’s parade, Salisbury Pride, a well-known gay advocacy group in the area, accused officials of banning their float from the parade.

Since then, parade officials said that they and their volunteers have “received hate mail, emails, and threats to protest the 2018 parade to not only their personal email addresses, home addresses, social media but also to their place of employment.”

“The personal attacks on these people’s livelihoods, local businesses they own, places of employment, and them just as a human being were unprovoked and no volunteer should ever have to endure something of that nature,” organizers said in a Facebook post on Tuesday.

A spokesperson for Salisbury Pride, Beth Meadows, said the group had no connection to the incident, however, and that the individuals attacking volunteers were not affiliated with Salisbury Pride.

“We very clearly stayed away from that,” Meadows said.

Parade officials were quick to dispel claims of discrimination, and said the float was banned because its sponsor, Avita Pharmacy, violated the rules by letting a separate group advertise its products without gaining prior approval.

That separate group was PFLAG, a group made up of parents of LGBTQ children.

But PFLAG members said the parade organizers kicked the float out of the parade because they were wearing rainbow attire.

“We were just trying to support Velerie (the Avita manager) and her work at the pharmacy,” said Donna Brown Odrosky, the group’s president. “We feel like we were discriminated against (by parade organizers) because of our shirts and our rainbow jewelry.”

Town of Spencer Police Chief Mike James, however, said that the rules had been violated, and that rainbow attire had nothing to do with the parade’s decision.

“I’m told these people tried to pull a fast one,” he said. “It’s to a tee what can be on a float. Parade organizers are very strict with their rules.”

The holiday parade’s members have maintained that the decision did not reflect bigotry or inequality, and that they “followed Holiday Caravan’s policies as we have always done — this wasn’t the first year we have had to remove an entry on parade day due to non-compliance.”

But gay rights activists have not let the issue go.

In a statement, parade organizers said the constant attacks have made it impossible to continue the parade.

“At last year‘s parade on November 22, 2017, an entry with a pre-meditated, full of hate, assumptions and lack of knowledge caused a scene that has forever impacted Salisbury historically as far as the future of the Holiday Caravan Parade,” the post read.