‘Scott Fitchett not only has a constitutional right to speak on New York’s public sidewalks, but will not bow down to the state’s pro-abortion bullying and intimidation…’

A pro-life demonstrator stands outside the entrance to Choices abortion clinic in New York. / Elizabeth Moore via Youtube

(Joshua Paladino, Liberty Headlines) A preschool teacher who was sued for proclaiming the Gospel outside abortion clinics in New York won his case on Monday.

In July 2018, Judge Carol Bagley Amon of the federal Eastern District of New York ruled against Schneiderman’s injunction to keep Fitchett from preaching outside abortion clinics.

The disgraced Schneiderman, who resigned due to sexual assault allegations, originally prosecuted Fitchett and 12 other pro-life speakers who talked with women outside Choices Women’s Medical Center in Jamaica, N.Y., trying to convince them to accept Jesus Christ and let their unborn children live.

James has not yet dropped the appeal against the other 12 defendants. 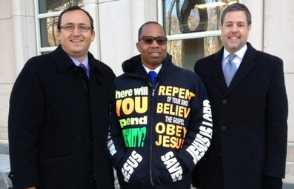 Fitchett said his mission is to “to persuade women to change their minds about seeking an abortion by communicating the gospel of Jesus Christ.”

At the time that Schneiderman pursued the injunction, he said Fitchett and others had “run their mouths” with “unlawful, un-American rhetoric.”

“We are not a nation where you can choose your point of view,” he said about pro-life Christians.

He also called the speak of Fitchett and the others “horrifying” and “illegal.”

“It was clear after a 14-day hearing that the Attorney General could prove no wrongdoing against Scott Fitchett, and never should have filed a lawsuit against him,” said  Roger Gannam, Liberty Counsel’s assistant vice president of legal affairs.

“Perhaps the new Attorney General has realized that Scott Fitchett not only has a constitutional right to speak on New York’s public sidewalks, but will not bow down to the state’s pro-abortion bullying and intimidation.”