All the scandals, all the lies, all the coverups…

(Ana Michaels, Liberty Headlines) “I can tell you one thing. I can tell you that Hillary Clinton is still my greatest role model in politics,” said Sen. Kirsten Gillibrand (D-NY) on a recent episode of 60 Minutes.

That was one quote from a 12-minute segment filled with flip-flops in the Senator’s policy positions, but it’s arguably one of worst and was lambasted on social media by one of Bill Clinton’s sexual assault victims.

Gillibrand yesterday on 60 Min..”I can tell you that Hillary Clinton is STILL my greatest role model in politics”.  @SenGillibrand apparently aspires to be a Rape Enabler.  Not a good role model for your son, Senator. pic.twitter.com/QBoD4vKWcZ

Only since the #MeToo campaign began has Gillibrand shown the slightest remorse about the actions of former President Bill Clinton, telling the NY Times last November that it would have been an ‘appropriate response’ for him to step down. 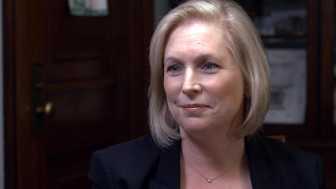 Gillibrand has been a consistent recipient of Clinton support – financial and otherwise – for over 20 years, despite Hillary Clinton’s troubling and checkered history.

So what is the background of Gillibrand’s “greatest role model,” Hillary Clinton? Decades of long-running political scandal baggage, so much that half of the nation in a poll said she was a liar and untrustworthy.

Early on, the Clintons engaged in the targeting of organizations and individuals who hindered their political campaign using the Internal Revenue Service (IRS). In addition to a laundry list of right-wing organizations, Hillary Clinton made sure that several of her husband’s romantic partners were caught up in the net – including Juanita Broaddrick, Gennifer Flowers and Paula Jones.

There are very few people who are unfamiliar with Monica Lewinsky and the fact Hillary’s husband had an affair with her in the Oval office, then lied to Congress about it.

However, earlier accusers of Bill reported they were subject to prolonged intimidation tactics by Hillary. Accuser Kathleen Willey even wrote a book about it.

Hillary Clinton dismissed the claims of the accusers as false, consistently said the accusations were lies, and her famous claim of a “vast right-wing conspiracy” was born.

More recently, while Secretary of State, Hillary Clinton lifted a long running travel ban on radical Islamic scholar Tariq Ramadan, the grandson of Muslim Brotherhood founder and Hamas funder Hassan al Banna, so that he could visit multiple cities in the U.S.

There was Travelgate, where seven staffers in the travel office were fired. Hillary Clinton was accused of allegedly being the main person behind the firings and of making false statements about her involvement. After an independent counsel investigation, Hillary was let off the hook for “insufficient evidence” that she knew she was making a false statement or that things she said led to the firings.

The Death of Vince Foster & Whitewater

Not long after Travelgate began, Deputy White House Counsel Vince Foster allegedly committed suicide in a park not far off the George Washington Parkway. It was suggested that Foster was distraught over Travelgate and suffered from depression but his death occurred at the same time the Whitewater investigation was heating up.

According to reports in the NY Times, documents related to the Whitewater case went missing from Foster’s office, were given to Hillary’s chief of staff and kept in safe for five days before being turned over to a personal attorney.

The Whitewater scandal, boiled down, is Hillary and her husband got away with a real estate scam. The Clintons, and their friends the McDougals who obtained the original funds to buy the land and develop it, created the Whitewater Development Corporation to confiscated a home from people (mainly retirees) if they missed a single mortgage payment. The property would then be flipped and sold again.

Americans were murdered by terrorists in the compound in Benghazi, Libya on Hillary’s watch as Secretary of State. It was learned through a lawsuit by Judicial Watch that Clinton, the State Department and the White House coordinated on talking points about the attack. Documents revealed that Clinton and the White House blamed an obscure YouTube video for the incident, but knew from the start it was a terrorist attack.

During her testimony in front of Congress, Clinton downplayed the lie about the video and uttered the now famous phrase “what difference, at this point, does it make?”

Secretary of State & Pay to Play

Records show that 85 of the 154 private interests/lobbyists that were officially given access to Hillary Clinton while she was Secretary of State donated to the Clinton Foundation or an affiliate of the foundation.

In March 2015, it was uncovered that during her tenure as Secretary of State, Hillary Clinton had used a private email server for official communications instead of the State Department email maintained on secure federal servers. Clinton sent and received official government emails, many marked classified at the time, using her “home brew server.”

On July 5, 2016, FBI Director James Comey issued a statement that Clinton would not be charged because she had only been “extremely careless” and that her actions “lacked intent.”

As late as Summer and Fall 2017, more Clinton emails were still being discovered. The Department of Justice reopened the Clinton Email case in January 2018.

In 2010, a Russian nuclear agency called Rosatom purchased the controlling interest in Uranium One, a mining firm based in Canada.

Deals of this nature require specific approvals from the Committee on Foreign Investments which consists of nine senior US officials, including the secretaries of State, Defense, Treasury, Homeland Security, Commerce, and Energy, the attorney general, and two White House representatives. The deal unanimously approved by the committee and only one person could override or block the sale – President Barack Obama.

$145 million in donations to the Clinton Foundation was recorded for “speaking fees” just from Uranium One- and Rosatom-tied donors alone.

The Hill recently reported that an undercover FBI informant named Douglas Campbell told a congressional committee that he that Russian nuclear executives in Moscow had hired American lobbying firm APCO Worldwide specifically because it was “in position to influence the Obama administration, and more specifically Hillary Clinton.”

To add to the list, the Federal Election Commission is investigating an $84 million money laundering scheme allegedly orchestrated by the Hillary Victory Fund, a joint fundraising committee between the Clinton campaign, the Democratic National Committee, and a number of Democratic state parties.

The Hillary Victory Fund is accused of funneling $84 million from the DNC through 30-40 state party chapters and then the states would send the money right back to the Clinton campaign.