The State Department has changed since the departure of Rex Tillerson, with Mike Pompeo being more open to Trump’s ideas and tactics… 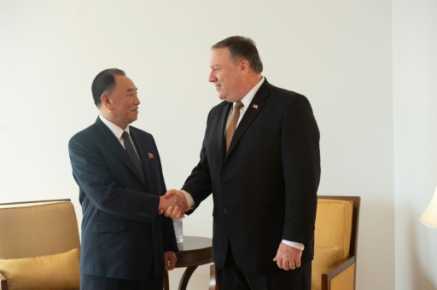 (AFP) – Shortly after Mike Pompeo was unveiled as US Secretary of State it was revealed that he had already, as outgoing CIA director, embarked on a historic diplomatic mission.

Now installed as Washington’s top diplomat and one of the heavyweights in the US administration, the former soldier and Kansas lawmaker has stuck with the dossier, despite its challenges.

On May 24, he looked uncomfortable and grim as he appeared to announce his failure, reading senators a letter that Trump had sent to Kim, cancelling the summit after a perceived slight from Pyongyang.

But barely eight days later, the 54-year-old secretary’s more familiar smile was back in place as he and Trump walked Kim’s right-hand man back to his car after a historic White House meeting.

The summit was on for June 12 in Singapore — and Pompeo’s stock was again on the rise as an agency leader who can both interact productively with Trump and pursue a diplomatic strategy.

No-one yet dares guess whether Trump’s Quixotic decision to grant Kim his long sought after summit with a US leader will succeed in convincing the North to commit to nuclear disarmament.

But Pompeo has already proved more successful than his predecessor Rex Tillerson, the Texan oilman who clashed with Trump, demoralized his own staff and came up with little on the international stage.

Nevertheless, he has more than most riding on the outcome of next week’s once seemingly impossible face-to-face encounter between two unpredictable world leaders.

Mark Fitzpatrick of the International Institute for Strategic Studies warns that, whereas Tillerson tried to act as a cautious counterweight to Trump’s geostrategic inexperience, Pompeo has followed his president’s instincts.

“Pompeo is heavily invested in making the summit happen, with form seeming to be more important than substance,” he told AFP. “We will soon find out how successful he has been.”

While Tillerson, for example, saw value in standing by America’s commitment to the Iran nuclear deal and its European allies who backed it, Pompeo supported Trump’s decision to pull out.

“Tillerson knew that leaving the nuclear deal would isolate America. Pompeo may understand this, but has hitched his reputation to Trump,” Fitzpatrick said.

Another difference between Pompeo and his discreet predecessor, is his understanding of showmanship and symbolism. The former Exxon executive shunned the press, the former congressman courts it.

When Pompeo dined in New York with North Korean envoy and fellow former spy master Kim Yong Chol, he did so in a US diplomat’s apartment with wide views of midtown Manhattan.

In the official photos that Pompeo’s spokeswoman tweeted out of the event, not only did Kim’s man look small compared to Pompeo’s hulking frame, but America’s might was visible in the skyscrapers beyond, “including the Freedom Tower.”

Pompeo has now met Kim Jong Un twice and Kim Yong Chol three times, and is the most senior US official to have talked to the North Korean leader.

He brought the dossier with him from the CIA, along with fellow negotiator Andrew Kim, an intelligence officer who is now recognizable to the press corps and attends top-level meetings.

But he now also has the reins of the State Department and whatever regional expertise and negotiating talent is left there, after Tillerson’s era saw an exodus of senior staff.

His bulky presence appears to reassure former colleagues from Capitol Hill, many of whom harbor doubts about Trump’s ability to follow through on such a diplomatic undertaking un-shepherded.

“I have much more confidence in Mike Pompeo’s preparation for this meeting than I do in Donald Trump’s preparation for any meeting,” said Senator Mark Warner, the top Democrat on the Senate Intelligence Committee.

Republican Ron Johnson, a Republican on the Senate Foreign Relations Committee, had high praise for Pompeo’s experience and intelligence, but more importantly for winning Trump’s confidence.

“So I think he’s the perfect guy for the job,” he gushed.

Trump’s faith in Pompeo, who used to deliver regular intelligence briefings to the president in person, has also allowed the secretary to serve as a counterweight to fellow newcomer John Bolton, the hawkish national security adviser.

Several reports suggest Trump was annoyed when Bolton, in an interview, compared the quest to disarm Kim to that which removed the late Libyan leader Moamer Kadhafi’s nascent weapons program.

Pyongyang was predictably disturbed by the comparison, triggering the wobble that led to the summit’s temporary suspension — only for Pompeo to jump in and put the pieces together again.