‘Our officers have endured weeks of rocks, bricks, bottles, mortars, and other objects hurled at them with hate…’ 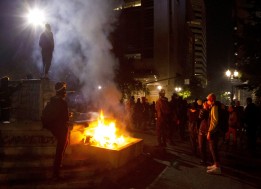 (Liberty Headlines) Downtown businesses in Portland, Oregon, have sustained about $23 million in damages and lost customers because of violent nightly protests that have brought the city to its knees, authorities said Wednesday.

At a police briefing, Deputy Chief Chris Davis said the intensity of the violence by an “agitator corps” and the length of the protests that are now in their sixth week are unprecedented in Oregon’s largest city.

Davis made a sharp distinction between Marxist Black Lives Matter protesters, whom he said were not violent, and a smaller group of people he repeatedly called “agitators.” He did not provide any evidence that there is a distinction, however.

“Quite frankly, this is not sustainable,” he said. “There’s a very big difference between protests and the kind of mayhem that we’ve seen every night. … The Black Lives Matter movement is not violent. The story that we’re going to talk about today is about a small group of agitators that is attempting to hijack that message and use it as a cover for criminal activity.”

Rioters have demonstrated for 41 consecutive nights against racial injustice and police brutality following the police killing of George Floyd in Minneapolis, and they are increasingly focusing their actions on federal properties, including Mark O. Hatfield Federal Courthouse in the heart of the downtown business district.

Authorities have declared riots several times and used tear gas to disperse demonstrators. A recently issued federal court order bans the police from using the tear gas unless a riot is declared, but critics have challenged the police on what constitutes a riot and who makes the decision to designate a protest as an unlawful event.

The police unleashed tear gas last week the day after Gov. Kate Brown signed a bill into law that banned the use of it unless a riot was declared. That prompted Brown and Oregon House Speaker Tina Kotek to publicly call on Mayor Ted Wheeler, who is also the police commissioner, to rein in the department and de-escalate its interactions with protesters.

Davis defended the decision to use tear gas and said that the alternative was sending officers into a chaotic crowd, which would likely result in injuries to both officers and protesters.

“I will be very happy if I can go the rest of my career without ever seeing us have to deploy C.S. gas,” he said, using another term for the substance.

“The reason why we’re seeing more and more C.S. gas has to do with really unprecedented levels of violence that we’re seeing and not that we’re trying to find excuses to use it. And that would be irresponsible of us to somehow ratchet down the definition of a riot so we can get to use C.S. gas quicker.”

Earlier Wednesday, the president of the police union said he has no confidence that city leaders will move to stop the protests.

“Our officers have endured weeks of rocks, bricks, bottles, mortars, and other objects hurled at them with hate,” union President Daryl Turner said. “Enough. The people who put on a badge and uniform every day are human beings.”

On Tuesday the U.S. attorney in Oregon announced federal charges against seven protesters accused of defacing a federal courthouse and assaulting federal officers.