(Kaylee McGhee, Liberty Headlines) Planned Parenthood Federation of America recently announced that Kevin Griffis has been named the organization’s vice president for communications, and he appears to be an appropriate voice for the aggressively pro-abortion activist group. 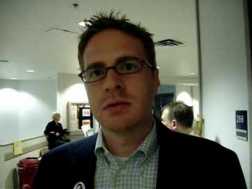 “We’re thrilled to welcome Kevin Griffis to our team,” said PPFA President and CEO Cecile Richards. “Kevin brings unparalleled communications experience in health care policy, advocacy, access, and delivery at a time when these issues have never been more important.”

Griffis served as a spokesman for the Department of Health and Human Services in the Obama administration, and has also led multiple political campaigns. As the Assistant Secretary for Public Services at HHS, Griffis oversaw communications on an expansive range of health issues, from the Zika virus outbreak, to the Affordable Care Act and its enrollment difficulties.

But Griffis has also been a long-time advocate for pro-abortion policies. In 2013 he was U.S. Senate hopeful Cory Booker’s campaign spokesman, and buttressed the candidate’s pro-choice comments.

“We can all agree that we want to prevent unintended pregnancies, and therefore the need for abortion,” Griffis told Politifact New Jersey. “Fundamentally, [Newark] Mayor Booker believes that a woman’s health decisions should remain between her and her doctor. Mayor Booker supports Roe v. Wade, which allows women the right to choose up to the point of viability.”

Griffis also condemned Louisiana’s and Alabama’s decisions to end state Medicaid payments to PPFA in 2015, claiming the states violated federal law. He also perpetuated the lie, often repeated by Democratic candidates on the campaign trail, that the organization provides mammograms for patients.

“Longstanding Medicaid laws prohibit states from restricting individuals who have coverage through Medicaid from receiving care from a qualified provider,” Griffis said at the time. “By restricting which provider a woman could choose to receive care from, women could lose access to critical preventive care, such as cancer screenings.”

Griffis also played an influential role in the implementation of the Affordable Care Act under the Obama administration. He remained a staunch supporter of the health care policy, even when it came under attack after its premiums were raised by 25 percent in over 39 states.

Griffis acknowledged the unusual increase in rates, but remained optimistic about Obamacare’s implementation.

“Headline rates are generally rising faster than in previous years,” he said in a briefing with reporters. “We think consumers will ultimately be surprised by the affordability of the premiums, because the tax credits track with the increases in premiums.”

PPFA said Griffis joins their team at an “unique” time, as it faces opposition from a Republican-led Congress and many grassroots, pro-life activists, especially following revelations that the organization has sold baby parts produced from its abortions.

“Our top priority is protecting access to care for our patients—and standing up for the millions of people across this country who need and deserve essential reproductive health care,” said Dawn Laguens, Executive Vice President of Planned Parenthood. “Kevin will be a great leader for our communications team—rallying the country to make sure access to reproductive health care is protected, and ultimately expanded.”