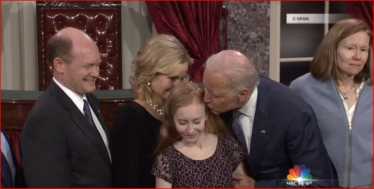 (The College Fix) A year ago, the University of Pennsylvania scrubbed a major donor’s name from campus after several women accused him of sexual harassment.

Now it has to consider how to respond to allegations against a much bigger name: the former vice president of the United States, potential 2020 presidential candidate, and leading campaigner against campus sexual assault.

Joe Biden is the namesake of the private university’s Penn Biden Center for Diplomacy and Global Engagement, set up shortly after his service in the Obama administration ended.

He has appeared and spoken many times at Penn over the past 12 months.

On Friday night, a former Democratic candidate for lieutenant governor of Nevada, Lucy Flores, accused Biden of inappropriately touching her at a campaign stop in 2014.

The vice president allegedly smelled Flores’ hair from behind, as she was preparing to take the stage, and “proceeded to plant a big slow kiss on the back of my head,” she wrote in an essay for New York magazine.

The timing of the allegation is also bad for a group that has benefited tremendously from using Biden’s star power.

Biden helped launch the White House “It’s On Us” campaign against campus sexual assault in 2014, and this week his foundation co-hosted the Biden Courage Awards with the It’s On Us project…Original Source…