‘Every Senator now faces a choice: to be loyal to the President or the Constitution…’ 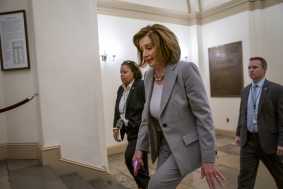 In a letter to her Democratic colleagues, Pelosi said she was proud of their ”courage and patriotism” and warned that senators now have a choice as they consider the charges of abuse and obstruction against the president.

But Republicans criticized the Speaker for what they said was an unnecessary and even destructive delay.

“Speaker Pelosi threw the United States Congress into unnecessary chaos with this pointless delay,” said Republican Sen. Charles Grassley of Iowa. “From the beginning, it’s been unclear what the goal of this hurry-up-and-wait tactic was or what the country stood to gain. We now know the answer was nothing. We’ve had three needless weeks of uncertainty and confusion, causing even more division.”

And according to Bloomberg News, Pelosi’s allies were puzzled over her ending the delay “without any notable concessions from Senate Republicans, leaving her allies stumped about her strategy in the three-week standoff.”

Pelosi has been in a standoff with Senate Majority Leader Mitch McConnell that has consumed Capitol Hill and scrambled the political dynamics more than three weeks after the House impeached Trump.

She said she has asked House Judiciary Committee Chairman Jerrold Nadler to be prepared to bring to the floor next week a resolution to appoint managers and transmit the articles of impeachment to the Senate.

“I will be consulting with you at our Tuesday House Democratic Caucus meeting on how we proceed further,” Pelosi wrote.

She did not announce a date for the House vote.

The move eases for now the protracted showdown between Pelosi and McConnell over the rare impeachment trial, only the third in the nation’s history.

The president faces charges of abuse and obstruction over his actions toward Ukraine.

Transmittal of the documents and naming of House impeachment managers are the next steps needed to start the Senate trial.

Yet questions remain in the Senate on the scope and duration of the trial.

McConnell wants to launch a speedy trial without new witnesses but Democrats point to new evidence that has emerged as they press for fresh testimony.

Trump mocked Pelosi with his tweets Friday and derided her and other Democrats late Thursday in Toledo, his first rally of 2020.

McConnell told GOP senators at a lunchtime meeting this week to expect the trial next week, according to two people familiar with his remarks. The people requested anonymity to discuss the private meeting.

He had signed on to a resolution from Sen. Josh Hawley, R-Mo., to change Senate rules to allow for the dismissal of articles of impeachment if the House doesn’t transmit them in 25 days. That now appears unlikely.

It’s still unclear who Pelosi will appoint as impeachment managers to prosecute the case in the Senate.