‘I pray that Jussie has a speedy recovery & that justice is served’ (OOPS!)… 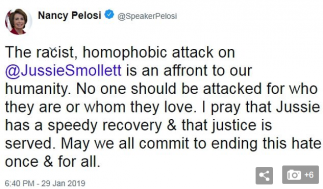 The actor and singer claimed he was attacked at a Subway by two men in ski masks in Chicago on January 29 at around 2am.

The “Empire” star told police the attackers poured a bleach-like chemical on him and tied a rope noose around his neck, yelling racist and homophobic insults as well as ‘This is MAGA country’.

He told officers the unknown chemical substance was used on him while ‘Empire f****t’ and ‘Empire n*****’ was shouted at him.

But on February 15, unconfirmed reports emerged suggesting the openly-gay actor might have staged the attack to save his job with help from two Nigerian brothers that he reportedly knew as extras on Empire.

Investigators have said they believe Smollett may have paid Abimbola ‘Abel’ and Olabinjo ‘Ola’ Osundairo $3,500 to assault him in the orchestrated, rehearsed attack.

Before any suggestion the attack was staged, a number of prominent politicians and celebrities tweeted their support for Smollett…Original Source…