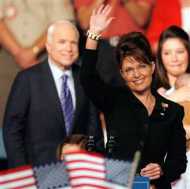 (Daily Mail) Former Republican vice-presidential candidate Sarah Palin says hearing that Sen. John McCain now regrets choosing her as his 2008 running mate is ‘like a perpetual gut-punch’ every time she hears about it.

And the latest verdict from the ailing 81-year-old Arizona Republican, she said, is perplexing because McCain has told her very different things over and over in person.

‘That’s not what Sen. McCain has told me all these years, as he’s apologized to me repeatedly for the people who ran his campaign – some who now staff MSNBC, the newsroom there, which tells you a lot,’ Palin said.

Hearing the opposite on TV, she said, was unnerving.

‘It’s not a real fun thing that part of my job is the requirement – is having to read the news every day,’ Palin lamented.

The New York Times revealed earlier this week that McCain wrote in his new book, The Restless Wave, that he regretted choosing Palin as his running mate and wanted Connecticut Senator Joseph Lieberman as his VP instead.

Palin said it’s possible that McCain himself doesn’t believe she was a drag on his White House aspirations a decade ago, but that hangers-on in his inner circle could be presuming to speak for him.

‘I attribute a lot of what we’re hearing and reading regarding McCain’s statements to his ghostwriter or ghostwriters,’ she explained.

‘I don’t know all the details of his condition right now. It happens to me also where people speak for me and a bell is rung, and you can’t un-ring the bell.’

‘I don’t know unless I heard it from Sen. McCain myself,’ she said…Original Source…