Japan’s Osaka has ‘no regrets’ over chaotic US Open final 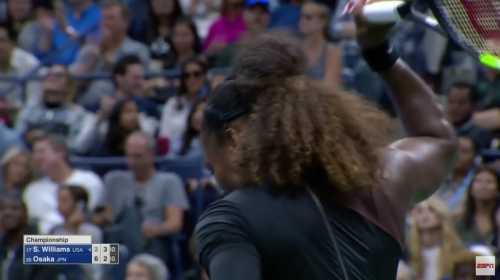 (AFP) Japan’s Naomi Osaka has refused to criticize Serena Williams after her historic US Open victory was overshadowed by the American’s furious row with the chair umpire.

However, it quickly was eclipsed by Williams’s volleys of racism, sexism and cheating, leading not only to widespread press attention but prompting those both within and outside of the tennis community to weigh in.

Williams’ argument with umpire Carlos Ramos began after he called a coaching violation in the second set on a hand gesture from her coach Patrick Mouratoglou.

After telling him she would rather lose than cheat, Williams escalated the argument by smashing her racket. She was docked a point and then called Ramos a “thief,” resulting in a game penalty.

Williams, who was fined $17,000 for the violations, maintains that they would not have been called on a male player. Among those who spoke out in support of Williams were actress Reese Witherspoon, TV host Ellen DeGeneres and former women’s tennis champ Billie Jean King.

(2/2) When a woman is emotional, she’s “hysterical” and she’s penalized for it. When a man does the same, he’s “outspoken” & and there are no repercussions. Thank you, @serenawilliams, for calling out this double standard. More voices are needed to do the same.

However, many also sided with Ramos and defended him against the specious allegations.

Japanese tennis legend Kimiko Date told AFP it made her “heart ache” to see Osaka reduced to tears and unable to savor her moment of glory due to Williams’ outburst.

But after returning to Japan on Thursday, Osaka insisted there were no hard feelings towards Williams.

“For me I don’t feel sad because I wouldn’t even know what I’m expected to feel,” said Osaka, who has climbed from 19th to seventh in the new world rankings.

“I don’t think I even thought about feeling sad because there’s no experience for me to draw on in any other Grand Slam final,” she added.

“I just thought I shouldn’t have any regrets. Overall I felt really happy and know I accomplished a lot.”

Osaka, who competes at next week’s Pan Pacific Open in Tokyo, also revealed her plans to break into the top five this year—and win a shiny gold medal at the 2020 Tokyo Olympics.

“It’s every athlete’s dream to play in the Olympics, so of course it would be my goal to win gold.”