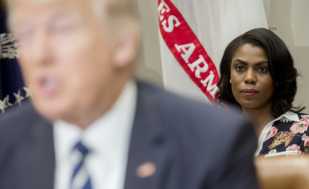 AFP/File / SAUL LOEB
President Donald Trump (L) has already branded Omarosa Manigault Newman (R, in focus) a “lowlife” after she released a recording of her firing by chief of staff John Kelly

(Andrew BEATTY, AFP) President Donald Trump on Monday plunged himself into a made-for-TV spat with his former aide Omarosa Manigault Newman — a mud-slinging match that has fuelled fears of chaos in his White House and cast doubt on his pledge to hire “only the best people.”

Manigault Newman — who first gained fame as a contestant on Trump’s reality show “The Apprentice,” and then secured a $180,000-a-year staff job at the White House — released a recording of a private conversation she had with the president after she was fired.

The recording by the disgruntled 44-year-old, once an ardent Trump ally, represents another stunning breach of presidential trust. It also came on the eve of the release of her tell-all book, “Unhinged.”

NBC’s “Today” program on Monday played the brief recording, in which Trump claims to have had no knowledge that she was sacked and expresses regret at the news.

That revelation sparked a stream of presidential invective on Twitter.

“Wacky Omarosa, who got fired 3 times on the Apprentice, now got fired for the last time. She never made it, never will,” Trump said in a stream of angry tweets.

The Republican president claimed that Manigault Newman “already has a fully signed Non-Disclosure Agreement!” — a first admission that members of the administration were asked to sign potentially illegal hush deals.

If such deals prohibit government staff from revealing all information they learn of at work, the American Civil Liberties Union said “they are unconstitutional and unenforceable.”

They run a big operation

Manigault Newman’s recordings have also caused political problems for Trump, dominating headlines for days — and she told NBC that there are “absolutely” more audio files.

The latest recording appears to show a president who has little knowledge of what is happening inside his own White House — or who is willing to lie to avoid confrontation.

“Omarosa? Omarosa, what’s going on? I just saw on the news that you’re thinking about leaving? What happened?” he said, apparently unaware she had already been fired.

“Nobody even told me about it,” Trump is heard saying, after chief of staff John Kelly terminated her employment.

Trump had already branded “Omarosa” — as she is commonly known in America — a “lowlife” after she released a recording of her firing by Kelly, seemingly recorded in the White House Situation Room.

He hurled angry tweets at his former friend, as he prepared to return to the White House following an 11-day vacation in New Jersey.

“She begged me for a job, tears in her eyes, I said Ok. People in the White House hated her. She was vicious, but not smart. I would rarely see her but heard really bad things,” Trump tweeted.

AFP/File / Olivier Douliery, DOMINICK REUTER Manigault Newman’s firing by White House chief of staff John Kelly — and her apparent audio taping of the encounter — is at the center of the political firestorm

“Nasty to people & would constantly miss meetings & work. When Gen. Kelly came on board he told me she was a loser & nothing but problems. I told him to try working it out, if possible, because she only said GREAT things about me — until she got fired!”

Trump also rejected Manigault Newman’s assertion — made in her upcoming book — that he was caught on mic using the N-word during the making of “The Apprentice.”

The president tweeted Monday night that the show’s creator Mark Burnett “called to say that there are NO TAPES of the Apprentice where I used such a terrible and disgusting word as attributed by Wacky and Deranged Omarosa. I don’t have that word in my vocabulary, and never have.”

Trump seemed to acknowledge that the unseemly fight would have been unusual for most of his 44 predecessors as president of the United States.

“While I know it’s ‘not presidential’ to take on a lowlife like Omarosa, and while I would rather not be doing so, this is a modern day form of communication and I know the Fake News Media will be working overtime to make even Wacky Omarosa look legitimate as possible. Sorry!”

She fired back, telling NBC: “I think it’s sad with all of the things going on in the country that he would take time out to insult me and to insult my intelligence. This is his pattern with African Americans. He doesn’t know how to control himself.”

Manigault Newman later expressed willingness to cooperate with special counsel Robert Mueller, who is investigating Russian interference in the 2016 election and possible collusion between Trump’s campaign and Moscow — and indicated that she had already been contacted by his office.

“If his office calls again, anything they want, I’ll share,” she said on MSNBC’s “Hardball.”

Trump came to office vowing to hire “only the best people” — but has struggled to put a lid on leaks, incompetence, backbiting and scandal inside his White House.