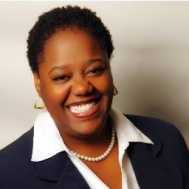 Mayfield, a Democrat who represents west Charlotte, said local police officers were similar to homegrown terrorists in a tweet earlier this month.

The tweet, posted on March 26, read: “Being Black in America under #45 (Donald Trump) has created homegrown terrorists wearing blue uniforms.”

Anne Steppe, wife of a CMPD sergeant, said Mayfield’s comments were “egregious” in her speech at the meeting on Wednesday night.

She wore a shirt that read: “My husband is not a terrorist. My husband is a hero,” along with several other women.

“My husband is not a terrorist,” she said, according to WBTV. “Our spouses of these fine people sitting here are not terrorists.”

Steppe urged Mayfield to help improve relations between police officers and the public, instead of “adding fuel to an already raging fire.”

“We will not turn a blind eye when members of our city council speak out so egregiously against officers that risk their lives to protect and serve those that live and work in the Queen City,” Steppe said.

“I have and continue to be one of the strongest supporters of law enforcement but I will NOT turn a blind eye to corruption, assaults, and the killings of unarmed black & brown people. If you are offended by my comments and not the situation YOU need to re-evaluate,” Mayfield tweeted.

Mayfield did not respond to Steppe’s speech, and WBTV said she appeared to leave the city council meeting before it ended.