(National Center for Public Policy Research) Louisville, KY / Washington, DC – At Thursday’s annual meeting of Humana shareholders, in response to a question from a representative of the National Center for Public Policy Research’s Free Enterprise Project (FEP), CEO Bruce Broussard all but gave up the insurance giant’s seat at the table in the national political dialogue about repealing and replacing ObamaCare. 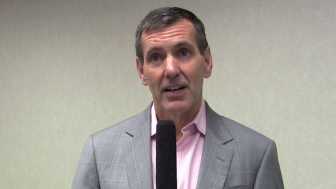 “I was extremely disappointed in Humana’s response,” said National Center General Counsel and FEP Director Justin Danhof, Esq., who attended today’s Humana shareholder meeting and questioned Broussard. “Humana and other major health insurance companies crafted, promoted and ultimately defended ObamaCare. With that law now in a death spiral, Humana should feel it has a duty to work with President Trump and Congress to help create a better path forward for the American people. Companies that foisted ObamaCare on the American people have a moral obligation to repair the damage that law caused for millions. It’s that simple.”

At the meeting, Danhof noted:

Humana shares a responsibility for the pain that ObamaCare has caused the American people. Therefore, it is incumbent on the company to be part of the solution.

The current political climate offers a unique opportunity for both private industry and health care consumers. President Trump has vowed to repeal and replace ObamaCare with a more patient-centric approach to provide greater options and use market forces to control prices. The first attempt at this effort may have stalled in the U.S. House of Representatives, but the American people still deserve a solution to ObamaCare’s broken promises.

I have a few quick questions: Will Humana seek a seat at the table by working with the Trump Administration and Congress to promote this new health care agenda as it did during the Obama Administration, and what specific reforms would you suggest to the new President?

“Humana is abdicating a moral responsibiity to help improve America’s failing health care infrastructure,” added Danhof. “Liberal politicians, together with the health insurance and pharmaceutical industries, crafted ObamaCare. Politicians such as Barack Obama, Harry Reid and Nancy Pelosi certainly deserve blame for the pain so many Americans are now experiencing under ObamaCare’s market-distorting mechanisms. But they left office or are out of power and aren’t going to be part of finding a solution to the mess. Companies that worked with them, such as Humana, are still around and have a stake in the outcome. They ought to use their considerable influence to work with President Trump and his team to craft a free-market-based health care plan.”

Earlier this year, another health care provider indicated to the National Center that it would be willing to work on replacing ObamaCare. Walgreens Boots Alliance Chairman James Skinner told Danhof at the pharmacy giant’s annual shareholder meeting that his company would be willing to work with the Trump Administration in finding a free-market alternative to ObamaCare. Following that meeting, Danhof joined former congressman J.D. Hayworth on “Newsmax Prime” to discuss why it is so important for corporations to work with the Trump Administration on health care reform.