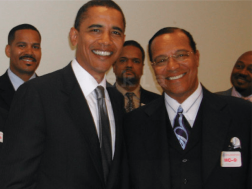 (Breitbart) A photograph of then-Senator Barack Obama (D-IL) and Nation of Islam leader Louis Farrakhan that was taken in 2005 at a meeting of the Congressional Black Caucus in Washington, DC, was released Saturday after a 13-year cover-up to protect Obama’s political career.

Journalist Askia Muhammad told TriceEdneyWire.com that he took the photograph after Obama had engaged “in a warm conversation with constituent and fellow Chicagoan Minister Louis Farrakhan.”

However, he realized that the photograph could endanger Obama’s presidential ambitions, which were already being widely discussed.

Farrakhan is a black supremacist and antisemite who also holds anti-gay views.

Rumors of an association between Obama and Farrakhan circulated during the 2008 presidential campaign in the wake of revelations about Obama’s decades-long membership in the Trinity United Church of Christ, led by the racist preacher Jeremiah Wright.

Those rumors could not be substantiated, however — and the story of Muhammad’s long-hidden photograph explains why.

Asia told TraceEdneyWire.com that he was confronted by a member of the Congressional Black Caucus about the photograph, and that he eventually surrendered it to Farrakhan’s chief of staff.

He secretly kept a copy of the image for himself, but he never told anyone and never released the image, for fear of burglary or retaliation against him, he told the left-wing Talking Points Memo website.

He told TraceEdneyWire.com that he believed the photograph would have destroyed Obama’s electoral chances…Original Source…