SHARPTON: ‘ I like Cynthia Nixon but putting pot shops in our communities is not reparations…’ 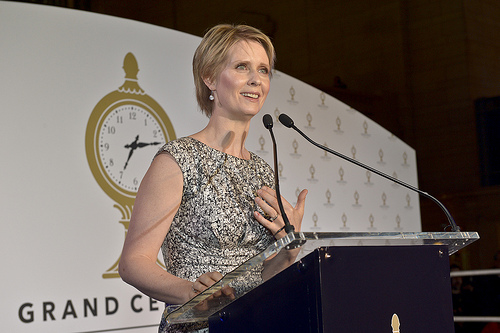 Nixon on Saturday told Forbes magazine “now that cannabis is exploding as an industry, we have to make sure that those communities that have been harmed and devastated by marijuana arrests get the first shot at this industry.”

“We (must) prioritize them in terms of licenses. It’s a form of reparations.”

The comments came under fire from some community leaders.

“I’m for legalizing marijuana and I like Cynthia Nixon but putting pot shops in our communities is not reparations,” the Rev. Al Sharpton tweeted. “Health care, education!!”

“Reparations is a repayment for the free labor that built this country,” said Wright, a former state Democratic Party chairman under Gov. Andrew Cuomo, whom Nixon is challenging.

“Ms. Nixon should relegate her comments to legalization, pro or con,” he said. “I believe social equity should be a part of licenses to sell marijuana, if and when legalization does occur. However, it is insulting to my soul, that the free labor that my ancestors gave to this country would be equated with the selling of marijuana.”

“It does a disservice to our community for her to play into harmful stereotypes of African-Americans as drug users and dealers,” the group said in a statement. “And it does an even greater disservice to the enduring consequences of both slavery and Jim Crow and the inequities these systems of oppression perpetuated to claim that legalizing marijuana would somehow erase that experience.”

The group called on Nixon to apologize.

Nixon on Saturday attended a rally for the legalization of pot in New York.

She has focused heavily on the issue and the fact that the disproportionate number of pot arrests impact people of color.

A Nixon spokeswoman could not be immediately reached for comment.

A year after calling pot a “gateway drug,” Cuomo this year has ordered a state study into the issue of legalizing marijuana.

He has argued that with Massachusetts having already legalized it and New Jersey considering it, the issue has changed.