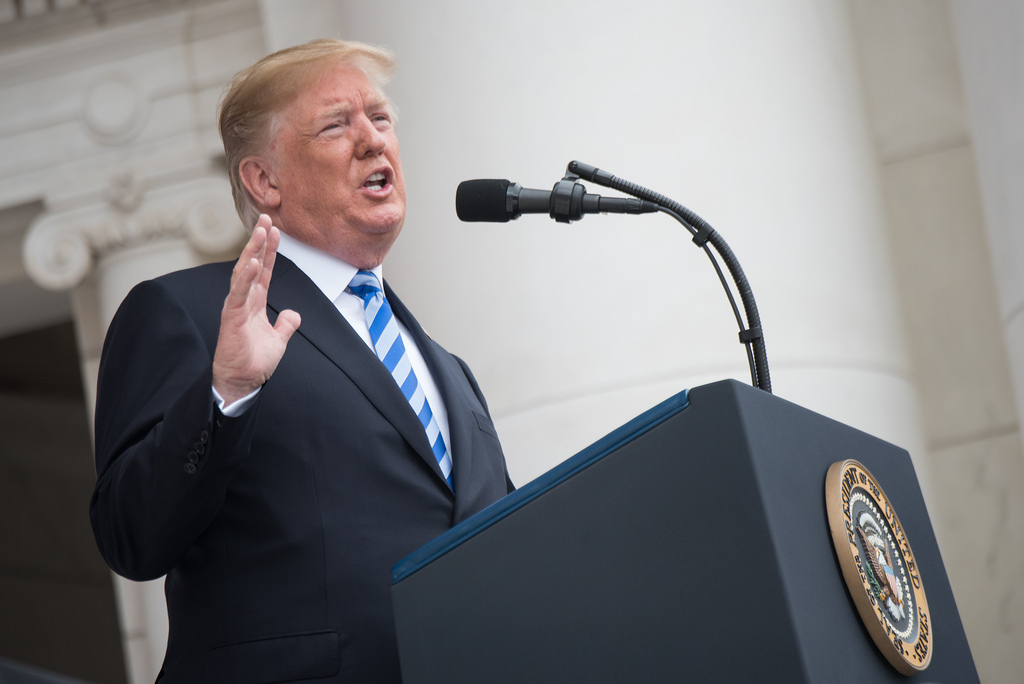 The lawsuit, which was filed in Manhattan state Supreme Court on Trump’s 72nd birthday, also said the charity was used to help pay for Trump’s political, personal and business dealings.

“As our investigation reveals, the Trump Foundation was little more than a checkbook for payments from Mr. Trump or his businesses to nonprofits, regardless of their purpose or legality,” Underwood said. “This is not how private foundations should function and my office intends to hold the Foundation and its directors accountable for its misuse of charitable assets.”

The president did not react well to the legal action, which he pinned on Underwood’s predecessor.

“The sleazy New York Democrats, and their now disgraced (and run out of town) A.G. Eric Schneiderman, are doing everything they can to sue me on a foundation that took in $18,800,000 and gave out to charity more money than it took in, $19,200,000. I won’t settle this case!” he tweeted.

“Schneiderman, who ran the Clinton campaign in New York, never had the guts to bring this ridiculous case, which lingered in their office for almost 2 years. Now he resigned his office in disgrace, and his disciples brought it when we would not settle,” Trump added.

The lawsuit, which stems from a probe that began in June 2016, just months before the election, alleges the Donald J. Trump Foundation raised $2.8 million that was used at the direction of top Trump campaign officials to help influence the 2016 presidential election.

“The Foundation’s grants made Mr. Trump and the Campaign look charitable and increased the candidate’s profile to Republican primary voters and among important constituent groups,” the lawsuit says.

“Is there any way we can make some disbursements this week while in Iowa. Specifically on Saturday,” Lewandowski emailed Jan. 29, 2016 to Allen Weisselberg, who at the time was the Trump Foundation treasurer and is currently the chief financial officer for the Trump Organization.

The Lewandowski email was followed by at least five $100,000 grants that were made to veterans’ groups in Iowa right before the Feb. 1 Iowa caucuses, the lawsuit charges. The enlarged checks given at public ceremonies even included Trump’s campaign slogan: “Make America Great Again.”

When a problem arose with making a grant before the Iowa caucuses to one of the charities that had been originally selected, the Campaign quickly secured a replacement Iowa veterans charity to appear at a campaign rally and receive a grant from the proceeds of the Iowa Fundraiser,” the lawsuit says.

In an Oct. 20, 2016 filing submitted to the Attorney General’s Charities Bureau that Trump sign as president of the foundation, the charity asserted it held the Iowa fundraiser to raise money for veterans’ organizations.

“This statement was false because, in reality, the Fundraiser was a Trump Campaign event in which the Foundation participated,” the lawsuit charges.

The Iowa fundraiser, which was billed as “Donald J. Trump Special Event for Veterans,” was planned, organized, financed and directed by the campaign, with the administrative assistance from the foundation, the suit alleges.

The actions, the lawsuit alleges, violated the Internal Revenue Service code for charities by, among other things, making expenditures to influence the outcome of an election.

Underwood’s office also sent formal referrals for investigation to the IRS and the Federal Elections Commission.

“Mr. Trump’s wrongful use of the Foundation to benefit his Campaign was willful and knowing,” the lawsuit alleges. “Mr. Trump was aware of the prohibition on political activities and the requirement of restrictions on related party transactions.”

The lawsuit also claims the New York City-based foundation, which was founded by Trump, who served as its president until he became President, was also used to benefit his personal and business interests by paying off his legal obligations, promoting his hotels and other businesses, and purchasing personal items.

According to the lawsuit, $100,000 in foundation money was used to settle legal claims against Trump’s Mar-A-Lago resort in Friday, $158,000 to settle a case against Trump National Golf Club in 2008 over a hole-in-one tournament, and $10,000 to purchase a painting of Trump at a charity auction that was then displayed at the Trump National Doral in Miami.

The attorney general’s office said since it began its investigation, the foundation paid taxes on three of the transactions and Trump repaid the organization, which still has not paid excise taxes on the Mar-A-Lago or Trump National Golf Club transactions.

The Foundation’s stated mission is to raise money that is to be used “exclusively for charitable, religious, scientific, literary or educational purposes either directly or by contributions to organizations that qualify as exempt organizations.”

The lawsuit charges the Trump Foundation board of directors should be held accountable for violating its fiduciary responsibilities, leaving all decisions to Trump.

In addition to the President, the lawsuit also names his children — Ivanka, Donald Trump Jr., and Eric — as defendants for their roles as Trump Foundation board members.

The foundation and those tied to it, the lawsuit alleges, violated state charities law by making false statements to the attorney general’s office, engaging in self-dealing, and wasting charitable assets.

“The Attorney General’s Investigation found that the Foundation is little more than an empty shell that functions with no oversight by its board of directors,” the lawsuit charges.

The White House and Trump’s lawyer could not immediately be reached for comment.

The lawsuit seeks $2.8 million in restitution and other court imposed penalties.

It also seeks to bar Trump from having any involvement with charities in New York for 10 years while also prohibiting his kids from such involvement for one year.

And while Trump has said the foundation will be dissolved, Underwood’s lawsuit seeks to have it done with oversight from the courts.

Schneiderman while in office brought more than 100 legal challenges against the Trump administration. Even before Trump was President, Schneiderman filed a $40 million lawsuit alleging pervasive fraud at a school known as Trump University created by the real estate mogul. That case was settled for $25 million.