A rise in Nike online sales in some more politically progressive states, such as Maryland and New Jersey… 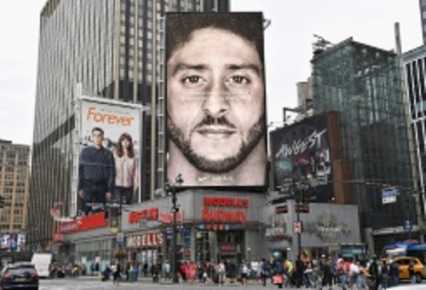 Nike, a member of the blue-chip Dow index, finished at $83.47 on Thursday, its highest-ever closing price, prompting applause on Twitter from basketball star and self-professed “#NikeLifer” LeBron James.

The new record came 10 days after Nike unveiled a sweeping new “Just Do It” marketing blitz featuring Kaepernick, who has been effectively blacklisted from the National Football League after protesting racism in law enforcement.

Shares of Nike were up slightly at $83.51 in midday trading Friday.

The Kaepernick campaign prompted some consumers to take to social media to destroy their Nike gear and provoked criticism from US President Donald Trump, among others.

But many marketers have described the ads as a savvy bet on higher sales from millennials and non-white consumers, an idea that has been supported by some data since the Kaepernick spots were unveiled.

Online sales for Nike rose 31 percent from the Sunday to Tuesday over the Labor Day holiday weekend period that included the Kaepernick ad, which quickly went viral after being teased on social media on the night of Monday September 3.

That is better than the 17 percent rise over the same period in 2017, according to data from Edison Trends.

Over the course of the six days ending September 9, Nike’s online sales dipped nine percent, but that was smaller than the 32 percent fall experienced over the same stretch in 2017.

“There was speculation that the Nike/Kaepernick campaign would lead to a drop in sales but the data does not support that theory,” Edison Trends said through a spokesman.

The Edison data showed a rise in Nike online sales in some more politically progressive states, such as Maryland and New Jersey, while Nike sales fell sharply in some of the more conservative states, including Idaho and Wyoming.