DAVID TEPPER: ‘Listen, Trump masquerades as an angel of light, but he is the father of lies…’ 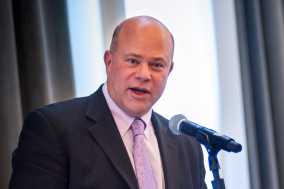 David Tepper, a billionaire investor and hedge fund manager who was the head trader at Goldman Sachs, is reportedly buying the team for a record $2.2 billion.

Tepper is yet another critic of Trump set to become a major figure in the National Football League.

At an address to a business school named after him at Carnegie Mellon University, Tepper admitted the economy was in good shape, but his feelings toward the president were negative.

President Trump has an extensive history with the NFL, dating back to 1984 when he owned the USFL’s New Jersey Generals.

Trump joined an anti-trust lawsuit against the NFL, and while the lawsuit technically succeeded, the league folded.

Most recently, Trump called players kneeling during the National Anthem – allegedly for police brutality against blacks – “sons of bitches,” and demanded that NFL owners remove the kneelers from their rosters.

Despite Tepper’s animus toward the president, it would be wrong to characterize him as a partisan Democrat.

He said he supported Barack Obama in 2008, Mitt Romney in 2012, and Jeb Bush in 2016 during the Republican primaries.

But the investor erupted, when before the election, he heard Melania Trump introduce her husband as a “charitable person.”

Tepper described Trump as a liar: “Listen, Trump masquerades as an angel of light, but he is the father of lies, especially concerned with charity or good deeds.”

**MORE COVERAGE OF THE NFL at LibertyHeadlines.com**

Tepper won’t be alone among league owners with anti-Trump feelings.

Jacksonville Jaguars owner Shad Khan said late last year that the president was “jealous” of the league, and implied that winning the White House was like some sort of consolation prize.

“To make it tougher, or to hurt the league, it’s very calculated.,” Khan said of Trump, who fell short in 2014 in his attempt to purchase the Buffalo Bills. “This is a very personal issue with him.”

And in a recording from last year that was leaked a month ago, Jeffrey Lurie, owner of the Super Bowl Champion Philadelphia Eagles, called Trump’s presidency “disastrous.”