GIULIANI: Mueller ‘should have made a decision and shouldn’t be complaining or whining now that he didn’t get described correctly…’

(AFP) Special Counsel Robert Mueller complained to the attorney general over his characterization of the Russia probe that allowed President Donald Trump to declare himself cleared of obstruction of justice, US media reported Tuesday.

Trump cast himself as fully exonerated after Attorney General Bill Barr delivered a four-page memo to Congress on March 24 that he called a summary of the two-year probe’s key findings, telling lawmakers the evidence was insufficient to support criminal obstruction charges.

The release of a redacted version of the full 448-page report on April 18 however revealed that Mueller had detailed numerous attempts by the president to thwart the investigation.

The Washington Post said Mueller’s letter to Barr three days later complained that the attorney general’s memo “did not fully capture the context, nature and substance of this office’s work and conclusions.”

“There is now public confusion about critical aspects of the results of our investigation,” Mueller reportedly wrote, in stark language that apparently surprised Justice Department officials.

“This threatens to undermine a central purpose for which the Department appointed the Special Counsel: to assure full public confidence in the outcome of the investigations.”

Mueller declined to accuse Trump of a crime, referring to Justice Department policy precluding the indictment of a sitting president, but specifically said that what he had uncovered made him unable to exonerate the president.

Democrats in Congress are expected to question Barr at length over his role in the probe and interactions with Mueller as he appears for two days of hearings on Capitol Hill this week.

On Wednesday, several called for his resignation — with House Speaker Nancy Pelosi also weighing in.

“Attorney General Barr misled the public and owes the American people answers,” she said on Twitter. “It’s time for DOJ to release the full report & all underlying docs — and finally allow Mueller to testify. Americans deserve the facts. Barr must stop standing in the way.”

“Bill Barr needs to resign,” was California congressman Ro Khanna’s take. “He needs to resign tomorrow. At some point we need to distinguish fact from spin.”

“This is exactly why I said Mr. Barr should never have been confirmed in the first place.”

A rift between the special counsel’s office and Barr, Mueller’s boss and longtime friend, appeared to emerge in the days following the release of the attorney general’s memo, as investigators reportedly let it be known through intermediaries that they felt frustrated by Barr’s representation of their work.

The New York Times pointed to what it said were instances of Barr taking Mueller’s words out of context in a manner that painted a less damaging picture of Trump’s behavior and suggested that the president had no motive to obstruct justice.

Barr has also repeatedly said Mueller found “no collusion” between the Trump campaign and Russia — even though the special counsel’s report made a point of noting that he had not investigated “collusion,” which has no legal definition.

Mueller’s report — the culmination of a probe that had haunted Trump since the start of his presidency — confirmed that Russian operatives tried to help Trump defeat his Democratic rival Hillary Clinton, including by hacking into email accounts. 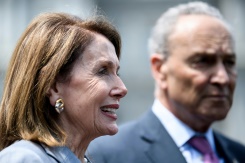 The probe found that Trump’s campaign knew of the sabotage attempt and took advantage of the impact on Clinton, but did not deliberately reach out to conspire with the Russians.

Several Democrats, notably presidential hopeful Senator Elizabeth Warren, have called for Trump to be impeached for welcoming a hostile power’s help and for allegedly obstructing the investigation after the election.

The White House has not commented on the letter but Trump’s lawyer Rudy Giuliani told CNN that Mueller “should have made a decision and shouldn’t be complaining or whining now that he didn’t get described correctly” on the obstruction issue.