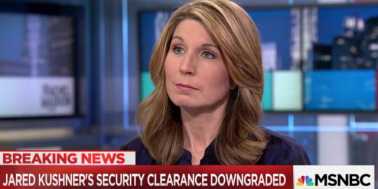 She entrenched herself in the elitist wing of the Republican Party as far back as 2008, when populist sentiments simmered in the figure of former Alaska Gov. Sarah Palin.

Wallace served as an advisor for Sen. John McCain’s 2008 presidential bid, but refused to vote for him because of Palin’s name on the ticket, Business Insider reported.

She railed against the media and consistently went off script in speeches and debates.

“Our mistake was not understanding how ahead of her time [Palin] was,” Wallace said.

Wallace had a brief stint on ABC’s “The View” as the token Republican, but was ultimately ousted because she failed to provide conservative opinions.

Now she’s part of the Republican Party that prizes “decency” above all political values.

She thinks the Republican Party has abandoned decorum in favor of sexism and bigotry.

“Are you proud that our path to victory is to just turn out more white guys?” she asked Sens. John Barasso, R-Wyoming, and Tom Cotton, R-Arkansas, Business Insider reported.

She doesn’t see a place for women in the GOP.

Pew found that support for Trump among white evangelical women dropped from 73 percent to 60 percent during the last year.

“If you’re offended by misogyny then I don’t think you’re attracted to the Republican Party in the time of Trump,” she said.

She says Republican men have done nothing to stand up to Trump’s misogyny.

“What sets the party back isn’t just the president’s posture toward women — it’s every powerful man in the party looking away and doing nothing. I’ve just never seen a display of cowardice like their silence,” she said.

She said the Republican Party under Trump doesn’t have room for moderate, establishment voices anymore, especially those of women.

“This species of a powerful, moderate Republican woman is near extinct,” she said.