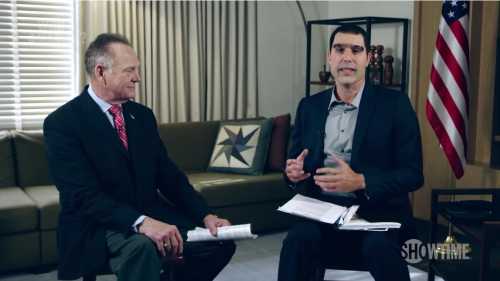 (AFP) Former Alabama Senate candidate Roy Moore is suing British comedian Sacha Baron Cohen for defamation after being pranked on his new show “Who Is America?”

The ex-judge is seeking $95 million in damages from the satirist and from the Showtime and CBS networks, which broadcast an episode featuring him on July 29, according to a copy of the complaint which was filed in a federal court in Washington.

Moore said he was duped into coming to the capital in February under false pretenses, to appear on what he thought was an Israeli television station that wanted to give him an award for his pro-Israel stances.

He was interviewed by a person he believed to be an Israeli anti-terrorism expert, Colonel Erran Morad, but who was in reality Cohen.

“During the segment, Defendant Cohen’s ‘device’—as part of the false and fraudulent routine—purports to detect Judge Moore as a sex offender, thus defaming him.”

During Moore’s Senate run last year, several women came forward to accuse Moore of having sexually assaulted or harassed them when he was a state attorney in his 30s and they were in their teens.

Although President Donald Trump initially backed Luther Strange, whom he had appointed to fill the seat of Attorney General Jeff Sessions, he eventually endorsed Moore as being preferable to Democrat Doug Jones despite the allegations.

Moore lost the race, nonetheless, likely in part due to concerns about the lurid accusations, as well as an influx of out-of-state dollars that Jones received from left-wing organizations eager to quell Trump’s momentum and whittle away at a GOP majority in the Senate.

Moore said he, his wife and their entire family had suffered “severe emotional distress and pain” as a result of the defamatory statements, “especially given his status as a prominent conservative and God fearing person of faith.”

Although Baron Cohen’s show drew smaller-than-expected audiences, relying on word-of-mouth for marketing, it garnered considerable media attention from the mostly conservative political figures who were tricked into playing along.

Former vice presidential candidate and Alaska Gov. Sarah Palin criticized Baron Cohen for impersonating a military veteran in a segment in which she participated.

Two weeks later, Georgia state Rep. Jason Spencer resigned from office after a segment aired featuring the Col. Morad character, who persuaded Spencer to shout racial slurs and drop his pants under the pretense of that they were filming a counterterrorism video.