“Migration should be a choice and not a necessity…’ 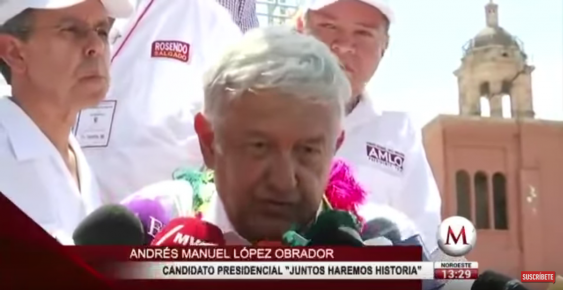 (Kate Morrissey and Kate Linthicum, The San Diego Union-Tribune) Mexican officials have promised to protect asylum seekers who are sent back across the border from the United States under a new Trump administration policy, even though it could force the migrants to wait months or years while their cases are considered by U.S. courts.

“The Mexican government does not agree with the unilateral measure implemented by the United States government,” Roberto Velasco, a spokesman for Mexico’s foreign ministry, said in a statement. “However … we reiterate our commitment to migrants and human rights.”

Migrants who were waiting on the Mexican side for their chance to lodge asylum claims with U.S. officials said they were deeply worried about the new policy.

“It will be horrible,” said a man from Cameroon who said he had been imprisoned and tortured by his government back home. He spoke on the condition of anonymity for fear of reprisals.

The man said he wouldn’t have a place to sleep if U.S. authorities turned him back to Tijuana to await the outcome of his case. He said he had slept under a bridge the night before.

A group of asylum seekers from Eritrea, an isolated African country that has been described as a dictatorship, were also worried about what would happen to them.

“We don’t want to come back here,” one of the migrants, also anonymously.

Officials in Tijuana also expressed anger at the new policy, saying the city could be inundated by migrants returned from the border. Leopoldo Guerrero Diaz, secretary of the Tijuana government, called on the Mexican federal government to take responsibility for asylum seekers required to wait in Mexico.

“I hope that the federal government will assume its responsibility, especially with funding, which is the most important,” he said.

City officials have chafed since the arrival last year of several large caravans of migrants, most from Central America.

After the U.S. significantly slowed its intake of asylum requests last year, migrants have had to wait weeks or months for the opportunity to plead their cases with officials at the border.

In the past, migrants who were deemed by authorities as having credible fears of returning to their home countries were detained for months or released into the U.S. while they waited for hearings. But under the new U.S. plan, which the Trump administration says is designed to reduce abuse of the asylum system, those migrants would have to wait in Mexico.

Migrant advocates on both sides of the border complain that the plan would put migrants at risk by pushing them into dangerous Mexican border cities that have some of the highest homicide rates in the world.

A record number of people were killed in Tijuana last year, more than in any other city in Mexico. In December, two Honduran teenagers who had traveled with a migrant caravan here were strangled and their bodies dumped.

Other Mexican border areas are under tight control of criminal groups. Migrants in the state of Tamaulipas have been killed, kidnapped, extorted from, and even forcibly recruited to work for cartels, authorities say. In 2010, 72 migrants were killed by members of a cartel about 100 miles south of the border city of Reynosa.

On Friday, Democrats on the U.S. House and Senate judiciary committees released a statement decrying the new plan.

“The Trump administration is on a mission to take apart the asylum system, which was developed after the horrors of World War II to ensure persecuted people have an opportunity to petition our government for safety,” said the statement by Sen. Dianne Feinstein, D-Calif., and Rep. Jerrold Nadler, D-N.Y. “The basic responsibility owed to those seeking asylum under U.S. and international law is that people fleeing for their lives cannot be turned away without a chance to make their case.”

U.S. and Mexican authorities met three times this month to plan the logistics of the returns, Velasco said. In those meetings, the U.S. said the return of migrants would begin at the San Ysidro Port of Entry and then be gradually expanded to other parts of the border, he said.

Velasco said Mexico has not made a Safe Third Country agreement with the United States. Under such an agreement, Central Americans would be barred from traveling across Mexico to apply for asylum in the U.S.

Mexico, whose new president, Andres Manuel Lopez Obrador, has called for more humane treatment of migrants, said that the key to reducing migration is improving the conditions of migrants’ home countries, Velasco said.

“We maintain that the basic solution to migration will be achieved by promoting the development of communities of origin of migrants, migration should be a choice and not a necessity.”