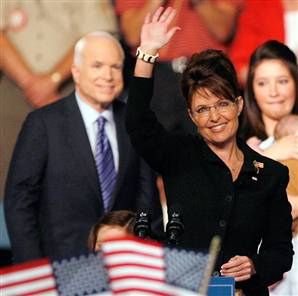 (Daily Mail) Senator John McCain has revealed he regrets choosing Sarah Palin as his running mate in the 2008 presidential election.

The Arizona senator, who is battling an aggressive form of brain cancer, admitted his regrets in an upcoming HBO documentary and in his book entitled The Restless Wave, both set for release later this month.

In the book the 81-year-old Republican details wishing he chose Connecticut Senator Joseph Lieberman instead of Palin as his Vice President pick.

In the documentary he touches on choosing Palin, calling skipping out on Lieberman ‘another mistake that I made’ in his political career.

When asked his reaction to McCain’s regret, the Democrat-turned-Independent Lieberman said ‘It touched me greatly’ to the New York Times.

McCain says that advisers warned him against Lieberman because he formerly caucused with Democrats and supported abortion rights.

Running with him would jeopardize his campaign by dividing Republican voters.

‘It was sound advice that I could reason for myself. But my gut told me to ignore it and I wish I had,’ he said in his book.

In the book McCain also shares his thoughts on President Donald Trump.

‘He seems uninterested in the moral character of world leaders and their regimes,’ he said.

‘The appearance of toughness or a reality show facsimile of toughness seems to matter more than any of our values. Flattery secures his friendship, criticism his enmity,’ he added.