‘It’s got a lot of history associated with the name, but I understand it’s a hurtful name…’ 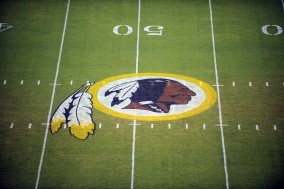 (Associated Press) Maryland Gov. Larry Hogan said Wednesday he believes the name of Washington’s professional football team “probably should be changed,” though he supported the team’s name when he ran for governor in 2014.

Hogan, a moderate Republican and a critic of President Donald Trump, was asked on NBC’s “Today” show whether he thought the NFL team should change its name.

“I think the time is probably right,” Hogan said. “I’m glad that they’re having that discussion. I believe the name will be changed.”

Hogan told the New York Times this week he is considering a run for president in 2024. The second-term governor remains popular in his heavily Democratic state, and his position on the Washington Redskins is another wedge between him and Trump, who said the team was considering a name change “in order to be politically correct.”

The Redskins play in Landover, Maryland. Hogan grew up in the area as a fan of the team.

“It’s got a lot of history associated with the name, but I understand it’s a hurtful name, and in today’s context it probably should be changed,” Hogan said.

When Hogan ran for governor in 2014, he expressed support for the team’s name. That year, he criticized a U.S. Patent and Trademark Office decision to cancel the Redskins’ trademark registration, saying the the decision about what to call the team should be left to team owner Dan Snyder.

In 2014, Hogan told the Washington Times that he likes to “call them the Washington Redskins,” and he added that he didn’t think government should have a role in determining what a business should call itself.

The team announced this month that it has begun a “through review” of the nickname, which experts and advocates call a “dictionary-defined racial slur.”

Asked by “Today” host Craig Melvin on Wednesday whether he acknowledged the name was a slur, Hogan said “absolutely.”

Snyder has not shown a willingness to change the name since buying the team in 1999. The recent national conversation on race has renewed opposition to the name, prompting the team to conduct the formal review.