‘He’s in a pretty good position to tackle something like this. Two years ago, he probably wasn’t…’

(Emma Dumain, McClatchy Washington Bureau) U.S. Sen. Lindsey Graham supports laws to temporarily revoke guns from people who might harm themselves or others, and he’s working on legislation that would give grants to states that pass such statutes.

It’s a controversial position among gun rights advocates, but the South Carolina Republican’s not worried about alienating his base.

“Not my base,” he said of his opponents of this issue, adding they are the “the fringe of the fringe.

“I think most Americans believe that multiple murderers shouldn’t have gun rights. Most Americans support background checks,” Graham continued. “The Second Amendment’s important to me, but it’s not a suicide pact.”

That Graham can talk this way about his constituents is a sign of his confidence in his standing in South Carolina — which explains how he can work on a hot-button social issue that once might have carried too much risk.

A few years ago, Graham was expected to have a 2020 primary challenger. Now, fewer South Carolinians doubt his commitment to conservatism. Between his rallying defense of embattled Supreme Court Justice Brett Kavanaugh and his continued alliance with President Donald Trump, Graham is enjoying popularity with his base, possibly like never before.

According to a March 2019 survey from Winthrop University, Graham has a 74 percent approval rating among South Carolina Republicans. Compare that to October 2013, when Graham’s support among the state’s GOP was at 45 percent.

This means, said veteran South Carolina GOP strategist Dave Woodard, Graham “has some political capital now where he can do something without fear” of angering voters.

“He’s in a pretty good position to tackle something like this,” agreed Chip Felkel, another South Carolina Republican strategist. “Two years ago, he probably wasn’t.”

Woodard and Felkel said Graham still has to be careful not to go too far when it comes to guns or any other provocative social issue, namely immigration, where Graham has taken near-dire political hits for supporting so-called “amnesty.”

Graham is also likely aware of his political limits.

Last year, he co-sponsored federal legislation to allow law enforcement and family members to petition the court for an “emergency risk protection order” to keep guns away from those deemed a danger to themselves and others.

Now up for reelection and the chairman of the U.S. Senate Judiciary Committee, Graham just wants to pass a bill that would provide grants to states that enact their own protection order laws, saying that approach has the best chance for success. 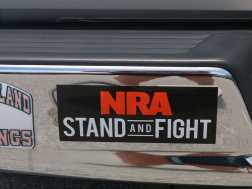 That narrow gun restriction also has the best chance of winning support from the powerful National Rifle Association, of which Graham — a gun owner who is traditionally supported by the organization — cannot afford to run afoul.

The NRA has not supported any of the 14 states that have passed protection order laws. It has, however, expressed a willingness to endorse federal legislation that would create incentives for states that pass these laws, if they meet certain criteria and don’t infringe on a person’s due process rights.

NRA spokeswoman Catherine Mortensen told McClatchy the organization would have to wait and see Graham’s bill before taking an official position.

If the NRA signs off, that could be enough for Gerald Stoudemire, president of Gun Owners of South Carolina, to support Graham’s bill. Stoudemire currently opposes emergency risk protection laws but has come around to Graham.

“I support him a lot more now than I did before” the Kavanaugh hearings, said Stoudemire. “I’d still vote for him.”

And to Graham’s argument about where most South Carolinians stand on gun issues generally, 80 percent of South Carolina respondents in last month’s Winthrop survey said they supported full background checks for firearm purchases.

Still, there’s a history in South Carolina of conservative gun rights enthusiasts not being kind to elected officials who support any gun regulation, however narrow, and reading such support as betraying a vow to protect the Second Amendment.

In 1994, then-U.S. Rep. Butler Derrick — a Democratic congressman of 20 years from the conservative Upstate — announced retirement, a decision many viewed as influenced by the backlash for his vote in Congress on expansive gun background-check legislation.

“The NRA was waiting for him back home,” said Woodard, who that year managed Graham’s first congressional campaign: A successful bid to succeed Derrick.

Gun rights advocates were enraged by Martin’s support of legislation to suspend gun licenses for those with mental health issues, and to revoke firearms from certain perpetrators of domestic violence. However, it was his opposition to allowing “open carry” without a permit in South Carolina that, in Martin’s words, “did me in.”

And just a few weeks ago, State Rep. Peter McCoy, R-Charleston, was threatened on Facebook for not having yet advanced an open carry gun bill through the State House Judiciary Committee he chairs.

It’s in this context that Graham could be taking a greater political risk than some might think.

“Anything that can be characterized as a move toward gun control or diminishing Second Amendment rights meets with a voracious outcry from a segment of the lobbying core and the folks they represent around the state,” Martin warned. “They will come after you with a vengeance.”

With talk of his gun bill, Graham already has at least one opponent fired up: Dudley Brown, president of the National Association for Gun Rights.

“He might use his newfound connection to the president as a way to define himself, but that doesn’t hold any water with us,” Brown said. “We don’t care if (Vice President) Mike Pence comes and does a fundraiser for him. On gun policy, Lindsey Graham is way to the left of his Republican constituents.”

Calling Graham’s protection order proposal “bribery” and promising to write a check for any “pro-gun” Republican who challenges the senator in a primary, Brown was recently in Greenville to protest Graham’s efforts alongside State Rep. Jonathon Hill, R-Anderson.

Both men are controversial. Brown’s group is criticized for being too combative and unyielding, while Hill last week was expelled from the South Carolina GOP Caucus for a pattern of “erroneous and hostile attacks” against his colleagues.

These are the figures Graham dismissed as outside his core base of supporters, though the scale and influence of detractors could grow if the senator takes on another issue sensitive to gun rights advocates.

Current law prohibits people with domestic abuse or stalking convictions from possessing guns. There are now efforts to expand this prohibition not only to live-in partners and spouses but also to past or present “dating partners.”

The NRA is emphatically opposed to expanding the prohibition. Graham has signaled he might not be.

“The fact that you’re not married doesn’t mean there’s not a threat,” Graham said recently. “As a matter of fact, a lot of these situations involve people who are dating. I just don’t know what the standard would be — you know, how far back you go … So I need to sit down and think about that.”

This issue is expected to come up when the U.S. Senate Judiciary Committee considers a rewrite of the Violence Against Women Act, which authorizes an array of grants to protect and support victims of domestic abuse and sexual assault.

Graham will have to tread carefully, though Felkel thinks his reputation as a bipartisan compromiser should help him steer clear of trouble.

(Emily Cadei of the McClatchy Washington Bureau contributed to this report.)