‘If you’re looking for a fair process, you came to the wrong town at the wrong time, my friend…’

(Ben Sellers, Liberty Headlines) As an emotionally wrought Supreme Court nominee Brett Kavanaugh did his best to navigate an onslaught of invasive questions and landmines from Democrats on the Senate Judiciary Committee, the Republican counterparts, led by Lindsey Graham stepped in to passionately defend the judge.

Following the format of morning testimony from Christine Blasey Ford, who has accused Kavanaugh of sexual assault, the GOP initially had Arizona prosecutor Rachel Mitchell asking Kavanaugh questions about the accuracy of his testimony.

But as Kavanaugh faced a stone-faced Dianne Feinstein, a testy and confrontational Dick Durbin, and even Mitchell appeared to be grilling him on his calendar entries, he clearly seemed drained by the attacks.

But Lindsey Graham, fed up with the unfairness of the process, broke with the process by using his time instead of ceding it to Mitchell, and he turned the blame back onto his Senate colleagues.

“When you see [Justices] Sotomayor and Kagan, tell them I said hello, because I voted for them,” he said, referencing the two Obama nominees who faced relatively smooth confirmations. “… I hope the American people can see through this sham.”

He offered Kavanaugh a much needed respite from the defensive posturing by sympathizing with him.

“If you’re looking for a fair process, you came to the wrong town at the wrong time, my friend.”

Graham’s indignation seemed to build to a crescendo as he reminded the committee members of the permanent impact, not only on Kavanaugh personally, but also on the political process.

“This is going to destroy the ability of good people to come forward because of this crap,” he said.

Following Graham’s time, Democrats on the committee including Sens. Sheldon Whitehouse, Chris Coons and Richard Blumenthal continued to hammer Kavanaugh over accusations of excessive drinking based on his high school yearbooks and recent media reports.

“I’m not gonna sit here and contest that—have at it if you wanna go through my yearbook,” he told Whitehouse. 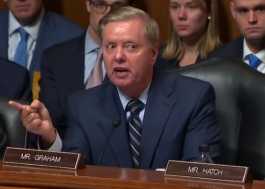 Other Republican senators, including Orrin Hatch, Ben Sasse and Mike Crapo continued to criticize the Democrats for not following proper procedure during initial investigations and the deceptive line of questioning to Kavanaugh over why he would not call for an FBI investigation.

“I hate to say it, but this is worse than Robert Bork, and I didn’t think it could get any worse than that,” Hatch said.