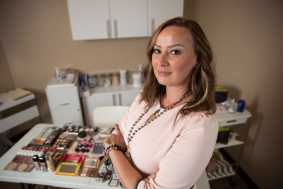 The decision, resulting from court-ordered mediation, ends a federal lawsuit filed by Jasna Bukvic-Bhayani of Charlotte.

As Carolina Journal reported last year, Bukvic-Bhayani wanted to open a makeup artistry school, but the state cosmetic board wouldn’t allow it unless she agreed to teach esthetics and bought thousands of dollars of unrelated equipment.

Before the lawsuit and mediation, the release says, no school could teach makeup in North Carolina without getting a cosmetic art school license, which would require the school to teach a 600-hour esthetics curriculum, even though makeup artists aren’t estheticians.

Bukvic-Bhayani, along with the Institute for Justice, sued in August, citing violations of the First Amendment.

The federal lawsuit continued for about six months, an IJ news release says.

“The board wanted me to open up an esthetics school, and I would have to have a building, zoning, and have it in the right place,” she said.”

Esthetics school, she told CJ, “covers parts of makeup artistry, but it was just not enough for me to learn all of the tricks and trade.”

Nothing having to do with makeup.

“There is a part that covers it, but that’s just basic colors and anatomy of the face. … You can’t match it, you don’t learn how to do eyebrows. It just didn’t cover enough.”

Simply put, she wanted to specialize in makeup artistry, not esthetics and all that goes with it.

“Every room would need a sink which requires plumbing,” she said of the esthetics schools. “A lot of times it is hard to find a space where you can have a sink in every room. The requirements include equipment like stables — we use chairs for makeup artist — it would include lamps, steamers, and just basic equipment, which would require a lot of money.”

No one should need a license just to talk about makeup, she says in the news release.

“To get the board’s license, I’d have to agree to spend hundreds of hours teaching skills my students don’t want or need to learn. I’m so excited that I am now free to teach my students skills they would actually use to do their jobs.”

“The U.S. Constitution protects the right to speak for a living — whether the speakers are authors, journalists or makeup artists like Jasna,” said Milad Emam, an attorney with IJ. Said IJ Senior Attorney Justin Pearson,“For over a year, the board has prevented Jasna from opening her school and creating jobs in North Carolina. With the board’s unconstitutional obstruction out of the way, Jasna and Julie are finally free to talk about makeup.”…Original Source…