‘Delaware is a very friendly state. It’s a state where its leaders hug people…’ 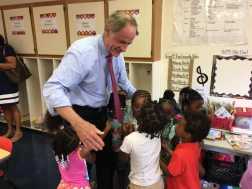 (Kaylee McGhee, Liberty Headlines) After two women in the past week accused former Vice President and possible 2020 presidential candidate Joe Biden of inappropriate behavior, liberals have rushed to his defense, claiming Biden is just an “affectionate” person who tends to be “hands-on.”

“He’s made it clear his intent was never to make people feel uncomfortable or any kind of harm,” Sen. Tom Carper, D-Del., told reporters on Monday. “Delaware is a very friendly state. It’s a state where its leaders hug people young and old. We kiss babies. We do it in public.”

Two women have come forward to accuse Biden of inappropriately touching them, including former Nevada state representative Lucy Flores, who wrote in an article for The Cut that Biden kissed her without her consent at a political rally five years ago.

“I felt two hands on my shoulders. I froze,” she wrote. “‘Why is the vice president of the United States touching me?’ He proceeded to plant a big, slow kiss on the back of my head.”

And on Monday, former congressional aide Amy Lappos said Joe Biden inappropriately touched her and rubbed noses with her during a 2009 political fundraiser in Connecticut.

“It wasn’t sexual, but he did grab me by the head,” Lappos told The Hartford Courant. “He put his hand around my neck and pulled me in to rub noses with me. When he was pulling me in, I thought he was going to kiss me on the mouth.”

Actress Alyssa Milano, a well-known #MeToo activist who propagated the “Believe All Women” slogan, claimed that Biden “never meant to make anyone uncomfortable.”

“I am proud to call Joe Biden a friend,” she wrote on Twitter. “He has been a leader and a champion on fighting violence against women for many years, and I have been fortunate to accompany him to events with survivors where has listened to their stories, empathized with them, and comforted them.”

I am proud to call Joe Biden a friend. He has been a leader and a champion on fighting violence against women for many years, and I have been fortunate to accompany him to events with survivors where he has listened to their stories, empathized with them, and comforted them. pic.twitter.com/cI0jsKlu3P

“I respect Lucy Flores’ decision to share her story and agree with Biden that we all must pay attention to it,” she continued. “But, just as we must believe women that decide to come forward, we cannot assume that all women’s experiences are the same.”

During “The View” on Monday, hosts Whoopi Goldberg and Meghan McCain said Biden has always been an “overly familiar” and “hands-on kind of guy.”

Hosts Joy Behar and Meghan McCain pointed out that since Flores “does not claim this is a #MeToo moment,” her accusation doesn’t have as much weight as ones leveled against other prominent men.

“She felt annoyed or uncomfortable with it, so we have to accept that,” Behar said. “But I don’t think it rises to points we’ve been listening to about Harvey Weinstein and the rest of these people. It just doesn’t look like that.”

“We all know Joe Biden,” Behar continued. “He’s been here. I remember when I met him in Florida before he was Vice President, and he was so friendly. He’s a close talker. He comes up right to your face… so he talks close. He touches. That’s what he’s like and I feel it would be really unfortunate if we got rid of everybody who’s just an affectionate kind of person. Those are nice people too.”

Host Abby Huntsman questioned Flores’s motives for taking her story public and claimed Flores only did so because Biden has a shot at the presidency.

“Is it simply to let people know that I was uncomfortable? Which you could have done in private. Or is it because maybe you want someone else to win and you want him to have doubts about actually announcing for presidency,” she said.

Host Sunny Hostin agreed and said that it’s unlikely “we will see any more smelling of hair and kisses on the forehead” from Biden, especially as he moves toward the campaign trail.

“That pisses me off,” Goldberg said. “I don’t want Joe to stop doing that.”

The passionate defenses followed similar pleas on his behalf from “Morning Joe” co-host Mika Brzezinski on MSNBC on Monday.