‘It oftentimes depends on whose ox is being gored…’

(Kaylee McGhee, Liberty Headlines) Congress held a hearing on Thursday to address the overburdened judiciary, made so by growing caseloads and not enough approved judicial nominees.

Several federal districts are unable to keep up with the growing number of cases filed in both the civil and criminal courts, he said.

And while Republicans are gradually filling the empty seats left during former President Barack Obama’s time in office, the legal system is still struggling.

“It has now been 15 years since the last judgeship was established,” he said. “For the 27 district courts the conference has recommended new judgeships for, the average waited filings are 577 per judgeship. Twenty courts have about 500 waited filings, six above 700, and one above 1,000.”

In his opening statement, Issa said creating new judgeships would help restore the efficiency of courts at both the district and appellate levels.

“The courts aren’t backed up because of an apparent inefficiency, but because of a growing caseload,” he said. “We are at a crisis point: We must have judges to take on the caseload and we must have justice, as it has been known, kept. As it’s been said, justice delayed is justice denied, and we can’t have that.”

Trump has taken advantage of the opportunity to reshape the judiciary, filling the benches with young, conservative judges.

And despite Senate Democrats dragging their feet during judicial nominations, the Senate has regularly approved nominees.

Democrats suspect the president and his Senate allies are fast-tracking nominations in case Republicans lose control of the Senate in the 2018 mid-term elections. 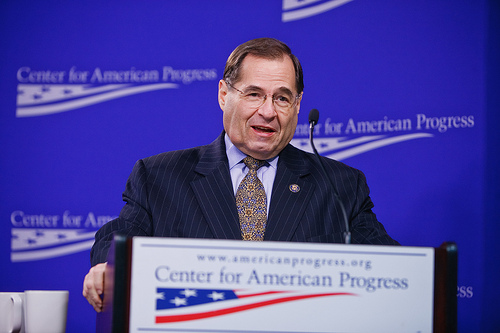 “At this point in time, we have a Republican Senate busy confirming appointees nominated by a Republican president,” Rep. Jerrold Nadler, D-NY, said during Thursday’s hearing. “I certainly hope the purpose of this hearing is to truly help overburdened courts and not to assist the President in his attempt to pack the courts with ideologically extreme judges.”

The GOP Senate has confirmed 21 of Trump’s nominations for judges to the court of appeals. Their cases, like the U.S. Supreme Court’s, deal exclusively with how to interpret federal laws, executive orders, bureaucratic regulations, and rules, and the Constitution.

Approval of the nominees is moving more slowly than in the past, however.

The Republican-led Senate can confirm nominees with a simple majority vote, but it still takes an average of 190 days to confirm each of Trump’s appellate and trial court judges, according to a new study by the Washington Post.

But despite this, Trump has successfully nominated conservative judges meant to replace judges who had been appointed by Democratic presidents (Carter, Clinton, or Obama).

Already, nearly 40 percent of Trump’s nominees are those replacing judges appointed by Democrats.

During the hearing, Nadler said this rise in ideologically conservative judges was “alarming.”

“Never before have we seen a president outsource the task of picking judicial appointments to ideologically driven organizations, like the Federalist Society and the Heritage Foundation. As a result, we’ve seen many troubling nominations,” he said.

“While we might need more judges, we must also make sure that the individuals nominated are qualified. I’ve been alarmed by some of the appointments President Trump has made,” he said during the hearing.

Rep. Steve Chabot, R-Ohio, responded to these accusations and said they were a result of a typical sentiment the other side of the aisle voices when the opposite party is in power.

“I have to say as a conservative guy, myself, I found it alarming some of the nominations from the previous administration. So it oftentimes depends on whose ox is being gored. I think a number of the nominees tend to be more conservative this time around, but I don’t think it’s alarming. And it’s certainly not unprecedented,” he said. “But our federal judiciary, whatever side of the aisle we find ourselves on, I think we can all agree that we need quality people on the federal benches.”