(Paul Chesser, Liberty Headlines) After saying immediately after the November 2016 election that she had to assure her daughters and employees that “you are safe” after Donald Trump’s victory, liberal PepsiCo CEO Indra Nooyi has stayed in communication with the president, against the wishes of his rabid political opponents. 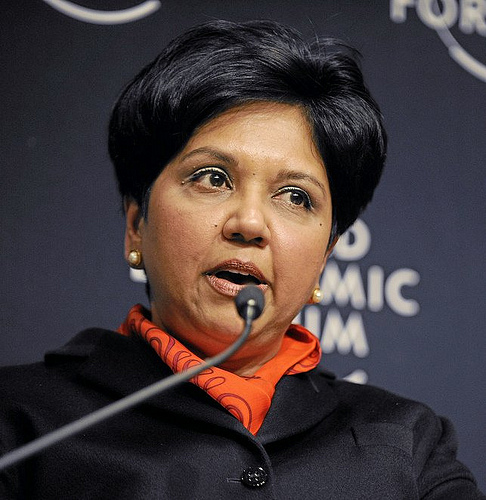 For that, Nooyi received praise from a conservative policy group at the company’s annual meeting in New Bern, NC on Wednesday. After Uber CEO Travis Kalanick bailed out on Trump’s Strategic and Policy Forum after pressure from leftists, and while Disney CEO Robert Iger endured abuse as well for his participation, the Pepsi chief remained despite her policy and philosophical differences with the president. The National Center for Public Policy Research (NCPPR), whose Free Enterprise Project holds stock in Pepsi, commended Nooyi in its statement at the annual meeting.

“Ms. Nooyi, thank you for serving on President Trump’s Strategic and Policy Forum,” said Justin Danhof, director of the Free Enterprise Project. “Despite your political differences with the President, your service is a credit to your leadership and Pepsi’s brand.

“Unfortunately, liberal agitators are working to harm companies whose leaders dare to work with the President to benefit our nation…,” he added. “Fortune recently reported that ‘lefty activists now are setting their sights on Disney and Pepsi.’ We encourage you to steel your spine against such attacks.”

The advisory panel consists of CEOs who advise Trump on economic issues such as trade and regulations.

Nooyi came under criticism from some conservatives for both real and false comments that were attributed to her after Trump’s election. But after expressing her initial concerns, she sought to dismiss the comments she heard throughout 2016 as mere campaign rhetoric.

“I’m sincerely hoping,” Nooyi said at a New York Times event on Nov. 10, “based on the talk we heard from our president-elect the day after the election, that what we heard before the election and what we are really going to see in action are quite different, and it’s much more measured.”

“We will all come together and unify the country,” she also said at the time. “So the process of democracy happened. We just have to let life go on.”

According to NCPPR, at the annual meeting today Nooyi emphasized the importance of communication with those who have political differences, and said it was an honor to serve on Trump’s strategic panel.

“Despite being a well-known liberal,” said Danhof, “she still feels she can work with the President to advance strategic economic goals benefiting all Americans.”

During his statement to the CEO, Danhof also asked Nooyi to be aware of the effects of taking controversial public policy positions in the name of the company can have on consumers and corporate profits. For example, Pepsi formally opposed North Carolina’s House Bill 2 (the “transgender bathroom bill”) last year and also withdrew its membership from the American Legislative Exchange Council, a conservative legislative advisory group.

“Please consider how it will play with your conservative customers, investors and employees,” Danhof said at the meeting. “If one of Pepsi’s goals is to create a more inclusive environment, a noticeable aversion to conservative opinions may have the opposite effect.”