‘Once again, it may be Judicial Watch—not Congress—that is finally able to extract the truth about this continuing Deep State scandal…’ 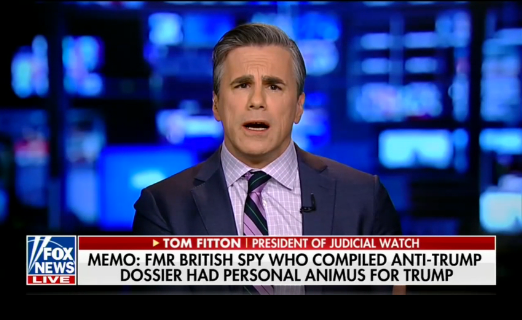 (Ben Sellers, Liberty Headlines) A week after members of the House Freedom Caucus publicly called on President Donald Trump to force the declassification of key documents in their investigation of bias and conspiracy within the Justice Department, government watchdog Judicial Watch is suing to obtain some of the records.

The lawsuit comes after the DOJ failed to meet the deadline for responding to several prior FOIA requests.

Ohr, who was fourth in command at the DOJ, promoted information provided by Steele—much of which was later discredited—for the FBI to justify its investigation of Donald Trump’s ties to Russia, including the wiretapping surveillance of Trump campaign adviser Carter Page.

The FBI used the “Steele Dossier” compiled by research firm Fusion GPS in its warrant applications to the Foreign Intelligence Surveillance Act’s top-secret tribunal, which then authorized the domestic surveillance.

However, the intelligence agency neglected to mention in their FISA applications that the dossier was being funded by the Hillary Clinton campaign and that Ohr’s wife, Nellie, was one of the Fusion GPS employees responsible for compiling it.

Rep. Devin Nunes, chairman of the House Intelligence Committee, brought this information to light in a February memo delivered to the White House.

The FBI agent overseeing the investigation, Peter Strzok, was subsequently embroiled in accusations of bias and impropriety that led to his firing in August.

Many of Strzok’s sinister intentions were revealed through a series of candid text-messages with his then-mistress, FBI attorney Lisa Page.

Ohr, meanwhile, continued to receive and promote information from Steele even after he was cut off as an official intelligence source, according to Judicial Watch’s investigation.

Through its series of FOIA request,  the nonprofit has sought to obtain all of the correspondence between Ohr and Steele, as well as that with Fusion GPS owner Glenn Simpson or any employees or representatives of the company. (Presumably, this would include any official communications stored on DOJ servers between Ohr and his wife.)

They also have requested all of Ohr’s travel requests, authorizations and expenses, as well as his calendar entries.

The most recent lawsuit relates specifically to the Form 302 documents that the FBI uses to summarize interviews.

The meetings in question occurred between November 2016 and May 2017, despite Steele having been admonished by the agency in February 2016 and subsequently deemed unsuitable as a source for revealing his relationship with the FBI to a third party.

At a press conference last week, several members of Congress, including Freedom Caucus leaders Mike Meadows, R-N.C., and Jim Jordan, R-Ohio, requested the 302 documents along with the FISA warrants and other related information.

Despite the efforts of members of Congress and the House Intelligence and Judiciary committees to force the release of records, including threats of contempt and impeachment against DOJ officials, the intelligence agencies have continued to stonewall the investigation.

“Once again, it may be Judicial Watch—not Congress—that is finally able to extract the truth about this continuing Deep State scandal,” Fitton said.