‘It is dividing us, not uniting us…’ 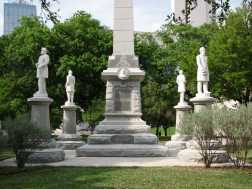 (Tess Sheets, Orlando Sentinel) Braving sweltering heat, hundreds of people flocked to the lawn outside Lake County’s courthouse Saturday in a show of dissent for a Confederate statue expected to make a home of the county’s historical museum despite persistent disapproval from many Lake residents.

The statue, an effigy of Confederate General Edmund Kirby Smith, won a spot in the museum when Lake County commissioners last month approved its introduction in a 3-2 vote

But the vote didn’t discourage the roughly 400 objectors attending the protest Saturday, who remained steadfast in their disapproval. They made their way to the courthouse about 11 a.m. from St. Johns I.F.M. Church on Bloxham Avenue, holding signs that called for blocking the statue’s relocation to Lake and chanting mantras of dissent such as “we don’t want it, send it back” and “no hate in Lake.”

Bryan Broomfield, a native Lake County resident who attended the protest with his wife and sister, said he felt validated by the turnout in his opposition to the statue. Broomfield, 62, has bore witness to Lake County’s history of racial intolerance and its changing landscape.

As a child, Broomfield, who is black, remembers the Jim Crow laws that forced him to enter the doctor’s office through a separate door from white people, swim at different pools and drink from a separate water fountain. Bringing the statue of a Confederate general is a reminder of Lake County’s past and the Confederacy’s mission to protect slavery, he said.

“I’ve seen how the times have brought about change here in Lake County,” Broomfield said. “ … If (the Confederate Army) won and kept control, would I still be a slave? Why would I want to celebrate or honor — and my tax dollars go to pay to honor — somebody that wanted me to be oppressed?”

The crowd, which was racially diverse and drew people young and old, remained energized throughout the protest as roughly a dozen speakers, including the mayors of Clermont, Mascotte, Groveland, Tavares and a former Eustis mayor, took the microphone to denounce induction of the statue.

The mayors represent four of eight Lake County cities who publicly opposed the statue in a letter to Florida Gov. Ron DeSantis

“We’re not here to erase history,” Tavares Mayor Troy Singer told the crowd. “We’re not here asking that a historical item be removed from its current location. We are here to peacefully protest the bringing of a statue, which has no connection to Lake County, nor Tavares. It is dividing us, not uniting us.”

Before the crowd set off down Main Street, organizer Mike Watkins, a Tavares pastor, said he hoped the march would help spark more public outcry over the statue’s relocation. Disturbed that the museum, which is funded by taxpayers, did not seek the public’s opinion when bidding for the bronze figure, Watkins hoped commissioners would retract their decision.

“When you realize you did something wrong, there comes a point when you need to correct what you’re doing,” Watkins said. “Instead of digging your heels in and continuing this evil thing, what they need to do is think about changing their decision and do the right thing.”

Vivian Lyte-Johnson, president of the Democratic Women’s Club of west Orange County, also attended the protest. Lyte-Johnson, of Winter Garden, said she hoped the march will at least inspire more Lake County residents to be involved in the voting process come election season.

“What I hope it will do is enlighten the rest of the community. On Election Day, they’ll come out and make a statement that this is not who we are,” Lyte-Johnson said.

The statue previously sat in the Statuary Hall in Washington D.C. as one of two figures meant to represent state of Florida. It’s set to be replaced by a statue of Mary McLeod Bethune, a civil rights activist and renowned educator.

Grenier sought a bid last year to have Smith’s statue relocated to Lake County, which was granted by a state committee. County commissioners who voted to approve the relocation argued that opposing the plan would censor the museum.

Watkins scoffed at the argument.

“There’s always some form of censorship,” Watkins said. “ … We don’t need these racist reminders of what the past was, put in our face.”