TRUMP: ‘It shows how bad our laws are…the Democrats are responsible for that…’ 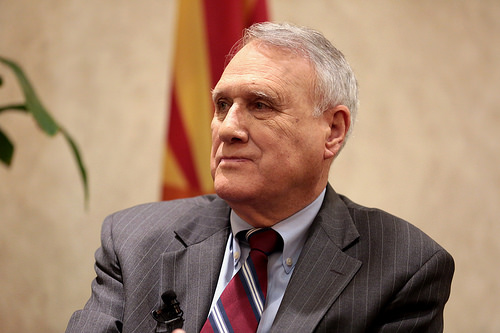 (Kaylee McGhee, Liberty Headlines) Arizona’s senators are asking the Trump administration to stop the release of migrant families in the Yuma area as thousands of migrants head toward the U.S. border, saying local authorities are overwhelmed by this flood of migration.

Sens. Jeff Flake and Jon Kyl, both Republicans, sent a letter to Secretary of Homeland Security Kirstjen Nielsen asking for federal assistance in transporting, housing, and caring for migrant families apprehended in Yuma.

The immediate release of these families into the Yuma area is “making it exceedingly difficult for local communities to deal with the influx,” the senators wrote.

Yuma has seen a massive surge in migration this year, becoming the second-busiest crossing on the U.S.-Mexico border, according to the Arizona Republic.

U.S. Immigrations and Customs Enforcement doesn’t have enough space to detain them, and is forced to mass release the families.

Yuma, with a population just over 200,000, doesn’t have enough resources or people to assist families when ICE releases and enrolls them in its Alternative to Detention program, dubbed “catch and release.”

In this fiscal year alone, U.S. Border Patrol agents have caught more than 12,367 family members in the Yuma sector.

Nielsen referred to this unexpected rise as a “crisis” when she visited Yuma in April. Flake and Kyl reminded Nielsen of this and asked her to “expedite” federal aid to the Yuma community.

“We recognize that the Department of Homeland Security may be constrained by federal law and court decisions in whether and how long it may detain migrant family units,” the senators wrote. “Nonetheless, if you are, in fact, required to release migrant family units, we respectfully request that more be done to assist local communities with the releases.”

The Senate Homeland Security and Governmental Affairs Committee is expected to take up legislation that would increase the DHS’s legal authority to detain migrant families.

Kyl is a member of the committee, and said the DHS needs a better “post-release” plan, since many migrant families aren’t adequately monitored and cared for after their release.

The senators’ letter comes as thousands of Honduran migrants approach the U.S. border, claiming to flee from violence and economic insecurity.

President Donald Trump said he would send as many troops to the U.S.-Mexico border “as necessary” to stop the caravan. He also threatened to withdraw federal aid from Honduras and other Central American countries that allowed the caravan to continue.

Trump called the caravan “an assault on our country,” and blamed the Democrats for encouraging it.

“I think this could be a blessing in disguise because it shows how bad our laws are,” Trump told USA Today. “The Democrats are responsible for that.”

Trump said the upcoming midterm elections will be an “election of the caravan,” vowing to uphold the nation’s laws and stop the migrants before they approach the border.

“In that caravan you have some very bad people,” he said. “And we can’t let that happen to our country.”